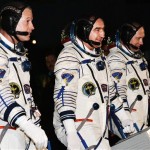 Russia is to deny the US future use of the International Space Station beyond 2020 and will also bar its rocket engines from launching US military satellites as it hits back at American sanctions imposed over Ukraine crisis.

Russia’s deputy Prime Minister Dmitry Rogozin announced a series of punitive measures on Tuesday against the US in response to sanctions imposed after Russia annexed Crimea.

The two countries have long cooperated closely on space exploration despite their clashes in foreign policy.

The Space Station is manned by both American and Russian crew, but the only way to reach it is by using Russia’s Soyuz spacecraft.

The US is keen to keep the $100 billion (£600) ISS flying until at least 2024, four years beyond its original target. Read more at The Telegraph.