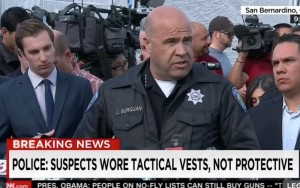 The two San Bernardino killers had an arsenal at home in Redlands, California, that included a dozen bombs. San Bernardino Police Chief Jarrod Burguan said Thursday that Syed Rizwan Farook and Tashfeen Malik carried 1,600 rounds of ammunition between them and placed a remote-controlled bomb at the Inland Regional Center, the Daily Beast reports.

They fired as many as 75 rounds in the conference room, killing 14 and injuring 21.

The two killers returned to the house in Redlands where police found nearly 4,500 rounds of ammunition and 12 improvised explosive devices. The two were killed in a shootout with police, who fired 380 rounds at them.

The killers were wearing black vests that held ammunition clips but were not wearing body armor.