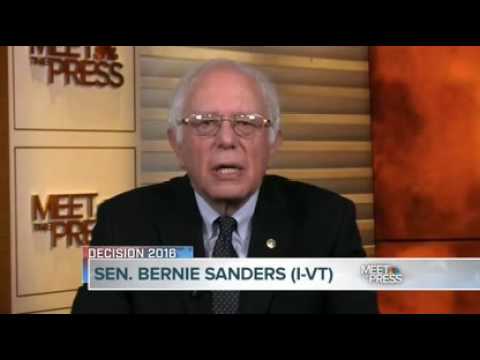 Sen. Bernie Sanders said today that he would have liked to see Hillary Clinton pick a more progressive running mate, such as Sen. Elizabeth Warren, D-Mass., and offered tepid praise of her choice of Sen. Timothy Kaine, Va.

After staying mum for a couple of days, Sanders, the runner-up in the Democratic primaries, weighed in during Sunday talk show appearances, calling Kaine “very, very smart” and “a very nice guy.”

Sanders, a senator from Vermont, said Kaine is more conservative than him but is “100 times better” than the Republican presidential nominee, Donald Trump.

“Would I have preferred to see someone like an Elizabeth Warren selected by Secretary Clinton? Yes, I would have,” Sanders said on NBC’s “Meet the Press.”

His comments come at a time when some of Sanders’ supporters are expressing disappointment in Kaine, suggesting that Clinton snubbed the left wing of the party.

“Are his political views different than mine?” Sanders said on CNN’s “State of the Union” when asked about Kaine. “Yeah, they are. He’s more conservative than I am.”

Sanders then teed off on Trump, saying the Republican nominee doesn’t believe climate change is real, favors tax breaks for the wealthy and has insulted Latinos, Muslims, women, veterans and African Americans.

“Trust me, on his worst, worst, worst day, Tim Kaine is 100 times better than Donald Trump will ever be,” Sanders said.

Sanders, who has endorsed Clinton, encouraged his supporters to vote for the ticket, saying the top priority in the November election is to defeat Trump.