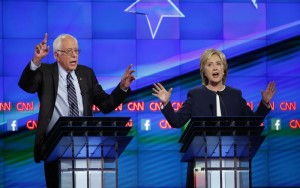 The biggest applause came as Sanders declared it was time to get over Clinton’s email scandal.

“The American people are sick and tired of hearing about your damn emails!” Sanders said, before crowds erupted into cheers and Clinton shook his hand.

“I’ve taken responsibility for it. I did say it was a mistake,” she said.

Earlier in the debate, Clinton ripped into Sanders over his moderate record on gun control, criticizing the Vermont senator for voting against the Brady Handgun Violence Prevention Act and for backing legislation that protected gun manufacturers over how their products are used. Read more.