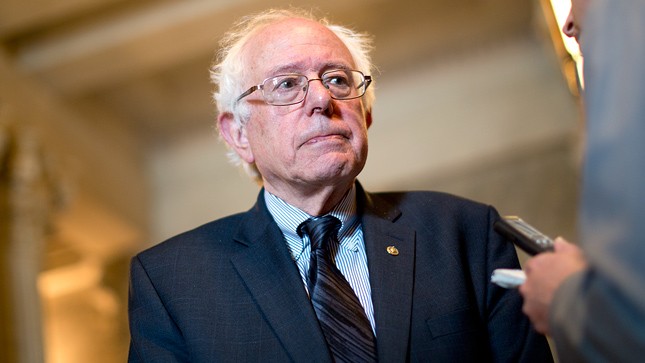 Sen. Bernie Sanders scored victories in the Democratic caucuses in Washington, Alaska and Hawaii on Saturday, three Western-states contests that the independent senator from Vermont had been favored to win.

During an address in Wisconsin, Sanders thanked Alaska for “a resounding victory.” He claimed strong momentum in Washington state.

“We knew things would begin to improve when we moved west,” a smiling Sanders said to huge applause. The Washington results came in as he spoke, and he drew a deafening cheer when he read the news aloud.

“That is what momentum is about!” Sanders shouted.

“Don’t let anybody tell you we can’t win the nomination or win the general election,” Sanders continued. “We’re going to do both those things.”

The delegates he captured in the sweep dented but did not seriously damage front-runner Hillary Clinton’s lead in the race for the Democratic Party’s presidential nomination. Winning all three states, however, buoyed his insurgent challenge, as the contest moves back to large, delegate-rich states in the Midwest and Northeast.

Clinton’s campaign conceded that Sanders had the edge in all three contests Saturday, but it claimed that even the largest prize, Washington, will make little difference in the dynamics of a primary contest that she has long been favored to win. Clinton campaigned in Washington for one day last week, whereas Sanders spent several days there. Neither candidate campaigned in person in Hawaii and Alaska.

Clinton did not campaign Friday or Saturday.

Sanders campaigned hard in Washington, the most populous state to vote Saturday, and one well-suited to his populist economic message. His supporters filled more than 15,100 seats at the Seattle Mariners’ baseball park on Friday night, according to his campaign.

“Don’t let anybody tell you that Hillary Clinton is the strongest Democratic candidate to take on the Republicans,” Sanders said. “It is not true.”

The rally Friday was the independent senator’s sixth such large rally in the state, which offers 101 delegates. Hawaii offers 25 delegates and Alaska 16.

In all cases delegates are awarded proportionally, so Clinton will still pick up delegates in contests she loses. Overall, however, her roughly 300-delegate lead over Sanders may be reduced.

Sanders spent millions on television ads in the three states. One ad featured Rep. Tulsi Gabbard, D-Hawaii, who is one of Sanders’ most high-profile backers. Sanders’ wife, Jane, campaigned for him in Hawaii.

Sanders hopes that momentum from victories Saturday will carry forward to a much-watched contest April 5 in Wisconsin, which shares borders with two states – Michigan and Minnesota – that Sanders won over Clinton in previous contests. Wisconsin, however, also shares economic and demographic characteristics with Ohio and Illinois, Midwestern states that have gone for Clinton.

Both candidates are expected to campaign in Wisconsin over the next few days, but they are both also looking ahead to contests later in April. The next big prizes on the Democratic calendar are New York, which allocates 247 delegates on April 19 and Pennsylvania, with 189 delegates, on April 26. A swath of four other Eastern states also vote on the 26th: Maryland, Connecticut, Rhode Island and Delaware together offer 195 delegates.

Because of Clinton’s current lead – 1,223 pledged delegates to 920 for Sanders – and because Democratic convention delegates are distributed proportionally to the primary results, Sanders will have to win upcoming contests by very large margins to catch up.

Clinton campaign manager Robby Mook has predicted strong performances for Sanders in the current string of caucuses and primaries but told supporters earlier this month that it is nearly impossible for Sanders to make up ground.

All eyes are on New York, where Sanders hopes to collect large numbers of delegates and embarrass Clinton in the state she represented as a senator for eight years.

Last Tuesday’s three contests, however, illustrate the difficulty for Sanders. He won in Idaho and Utah, and fell short in Arizona. He collected 73 delegates while Clinton netted 55. Her overall lead in pledged delegates remained above 300.