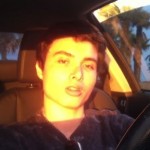 Police have identified the suspect responsible for Friday’s night shooting rampage at University of California, Santa Barbara that left seven people dead, including himself.

Elliot Rodgers was a lonely 22-year-old student at the school who felt alienated and reject, especially by women.

Prior to the shooting, on Friday, he posted eight videos on YouTube detailing his anger, frustrations, and plans for retribution.

In one, he said, “I don’t know why you girls haven’t been attracted to me, but I will punish you, for it is an injustice,” adding “I’ll take great pleasure in slaughtering all of you.”

He also wrote an 137-page rant called “My Twisted World: The Story of Elliot Rodger.

His father, Peter Rodgers, who is The Hunger Games assistant director, said he and his family reportedly warned police about his son weeks ago.

Police met with Rodgers, who they described as “polite, courteous.” Rodgers reportedly first stabbed to death his three roommates, killed two women and injured one at a sorority house, and then fired at random people before appearing to take his own life. In addition to the seven fatalities, 13 people were injured. Police say Rodgers was found with a Glock 34 and two Sig Sauer P226s and more than 400 rounds of ammunition. Read more at The Los Angeles Times.