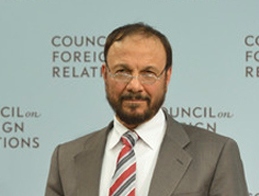 Anwar Eshki, a retired major general in the Saudi military, said on Monday that Saudi Arabia would establish an embassy in Tel Aviv in exchange for Israel adopting the Arab Peace Initiative.

“If he (Israeli Prime Minister Benjamin Netanyahu) announces that he accepts the initiative and gives all rights to Palestinians, Saudi Arabia will start to make an embassy in Tel Aviv,” Eshki said in an interview with Al Jazeera.

“We do not like Israel becoming isolated in the area,” Eshki added.

Eshki is no stranger to warm overtures toward Israel. Last year at an event in Washington, DC, he publicly shook hands with Israeli Foreign Ministry Director-General Dore Gold and also conducted an interview with an Israeli TV station.

Originally proposed in 2002, the Arab Peace Initiative—which calls for Israel to completely withdraw to its pre-1967 borders as well as for the return of Palestinian refugees, in exchange for recognition of Israel by the Arab world—has not been pursued by Israel. But Netanyahu has said in the past that there are “positive and negative aspects” to the initiative.