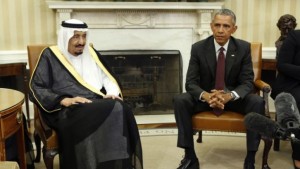 According to the Saudi Press Agency cited in a report on the Saudi-run al-Arabiya network, however, King Salman expressed to Obama his strong condemnation of the “Israeli escalation” at the Har Habayis compound which has been the site of clashes between Palestinians hurling rocks and firebombs, and Israeli forces in recent days.

The king called on the US president to stop “the Israeli attacks, including intervening with the UN Security Council to protect the Palestinian people,” according to the SPA report.

The king is said to have made the same appeal Thursday in calls to UK Prime Minister David Cameron, French President Francois Hollande and Russian President Vladimir Putin.

“The Israeli attacks contribute to feeding extremism and violence in the world,” Salman told Obama, according to the report.

Earlier Thursday, Salman appealed to UN chief Ban Ki-moon and members of the Security Council for “urgent measures” after clashes at the Temple Mount and al-Aqsa Mosque, state media reported.

“He called for serious and speedy international efforts and for the intervention of the Security Council to take all urgent measures to stop these violations,” it said.

Salman added that the “attack on worshipers” violates the sanctity of religions “and contributes to feeding extremism and violence in the world.”

Prime Minister Bibi Netanyahu also spoke with the UN chief Thursday, telling him that Israel was working to end the violence.

“Unlike the Palestinian side’s incitement, Israel is taking pains to preserve the status quo,” Netanyahu was quoted as saying in a statement from his office.

He added that Israel would respond aggressively to stone-throwing and firebomb attacks, which have caused the deaths of innocent Israelis.

The US, for its part, condemned “all acts of violence” at the Temple Mount site on Monday and urged for calm.

“The United States is deeply concerned by the recent violence and escalating tensions surrounding the Haram al-Sharif Temple Mount. We strongly condemn all acts of violence,” State Department spokesman John Kirby said, calling on all sides to exercise restraint.

“It is absolutely critical that all sides exercise restraint, refrain from provocative actions and rhetoric and preserve unchanged the historic status quo on the Haram al-Sharif Temple Mount, in word and in practice,” Kirby said.