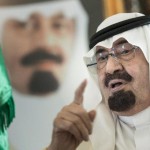 King Abdullah of Saudi Arabia has warned that the West will be the next target of the jihadists sweeping through Syria and Iraq, unless there is “rapid” action.

“If we ignore them, I am sure they will reach Europe in a month and America in another month,” he said in remarks quoted on Saturday by Asharq al-Awsat daily and Saudi-backed Al-Arabiya television station.

“Terrorism knows no border and its danger could affect several countries outside the Middle East,” said the king who was speaking at a welcoming ceremony on Friday for new ambassadors, including a new envoy from Saudi ally the United States.

The Islamic State (IS) jihadist group has prompted widespread concern as it advances in both Syria and Iraq, killing hundreds of people, including in gruesome beheadings and mass executions.

Lack of action would be “unacceptable” in the face of the phenomenon, King Abdullah said.

“You see how they (jihadists) carry out beheadings and make children show the severed heads in the street,” he said, condemning the “cruelty” of such acts.

“It is no secret to you, what they have done and what they have yet to do. I ask you to transmit this message to your leaders: ‘Fight terrorism with force, reason and (necessary) speed’.”