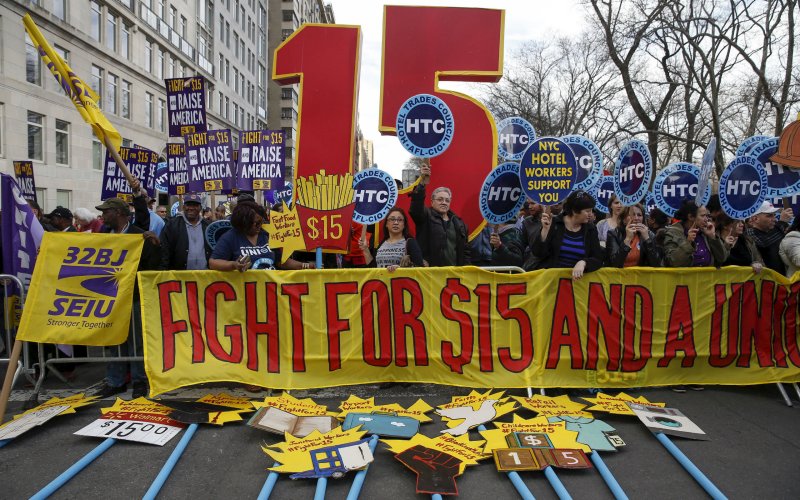 Sierra Parker, a 31-year old janitor in St. Louis, was thrilled when her city raised its minimum wage to $10 per hour. Overnight – after a years-long legal battle, with businesses trying to stop a city-passed ordinance – her income rose by nearly 25 percent.

“I was able to pay my bills on time, pay rent on time, have extra money saved up,” she said. “I got some new clothes – I really needed them. If I lose the extra wage, I’d have to go without that.”

On Aug. 28, the state of Missouri will effectively knock Parker’s wages below $10 again, when a “pre-emption” law stopping any city from raising its minimum wage higher than the state’s $7.70 mandate goes into effect. Missouri, where Republicans gained complete control of government in 2016, is the latest red state to roll back laws passed by blue cities, dealing a blow to labor and progressive organizers who hope to build urban beachheads in the Trump era.

Republicans have been concise about their reasons to kill St. Louis’s wage hike and stop Kansas City from passing one of its own. New Gov. Eric Greitens, R-Mo., who won in an upset last year, has criticized the state’s GOP legislative supermajority for ramming through the pre-emption law while promising he won’t veto it.

“It will kill jobs,” Greitens said of the wage increase, according to the St. Louis Post-Dispatch. “Despite what you hear from liberals, it will take money out of people’s pockets.”

Missouri’s law is one in a series of GOP responses to restive cities that largely voted against Donald Trump and have grasped for ways to resist his administration. Texas has passed a law forbidding its cities from taking “sanctuary” status and resisting compliance with federal immigration law; Gov. Greg Abbott (R) cited the new law in his re-election announcement speech this week.

“Unchecked overregulation by cities will turn the Texas miracle into the California nightmare,” Abbott argued in a speech earlier this year.

But on the list of urban policies rolled back by pre-emption, St. Louis’s minimum-wage law stands out – the rare example of a wage being raised and then lowered again after months of acclimation to the new standard.

“People are now spending more money on gas, bills, clothing, all kinds of goods,” said Sen. Jamilah Nasheed, D-St. Louis. “When a person makes more, they spend more. Greitens and the GOP in Missouri have shown all of Missourians who they really are, and they don’t care about the poor. They are heartless, and they are cruel.”

As the Aug. 28 deadline approaches, supporters of the wage hike are waging a two-front campaign. The labor-backed #SaveTheRaise push is directed at employers, who can decide whether to keep the wages at $10. Employers who have promised to do so are being celebrated, with activists encouraged to give them business.

“I am most interested in a living wage, but the minimum wage was a nice start,” said Paul Powers, founder of Lona’s Lil Eats, a St. Louis restaurant where tipped workers make an average of $14 per hour.

The campaign is also getting ready for the moment when many employers take advantage of the rolled-back wage and start paying workers less. The message: Be ready to boycott Shop-n-Save and other employers that have signaled they won’t keep the wages at $10.

“I’m in the middle of a contract negotiation now, and I’m told they plan on living up to the language of the contract,” said David Cook, president of UFCW Local 655. “Let me translate: That means they’re going to cut the wage as soon as they can.”