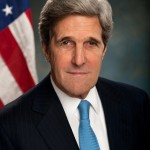 Here’s a sampling of some of the most controversial things Secretary of State John Kerry has said about Israel since he rose to the post of America’s top diplomat last year:

1. Israel could become an “apartheid state” if a two-state solution doesn’t pan out.

2. Israel announced 700 new settlement units and “poof, that was sort of the moment” the peace talks were imperiled.

3. It’s a “mistake” to keep demanding that the Palestinians recognize Israel as a Jewish state.

5. “Not one Israeli was killed by a Palestinian from the West Bank” in 2013. (A Shin Bet report said there were five such deaths).

6. Ignore Israeli thinking when it comes to Iran sanctions.

8. The U.S. views all Israeli settlements are “illegitimate.”

9. Amid the fall of Egyptian President Mohamed Morsi and a bloody civil war in Syria, the Israeli-Palestinian conflict is the “core issue” of Middle East instability.

10. Juxtaposing the victims of the Boston Marathon bombings and the Turkish militants killed aboard the Mavi Marmara flotilla after they attacked Israeli soldiers.