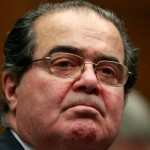 In 1972, the court ruled that the way executions were being carried out was unconstitutional, creating a de facto moratorium on the death penalty until a later ruling reinstated it. Read more at The Commercial Appeal.