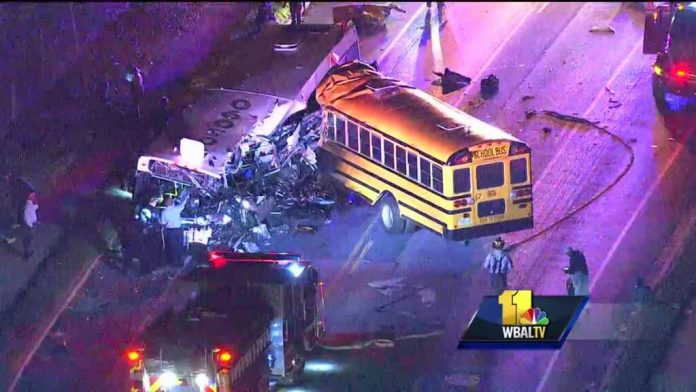 The school bus driver in the Baltimore crash that killed him and five other people Tuesday was no longer authorized to be driving a commercial motor vehicle because he had failed to provide required medical information to state regulators, state officials said Thursday.

The driver, Glenn Chappell, 67, was behind the wheel of a school bus that collided with an MTA commuter bus during rush hour. There were no children on either bus. The driver of the commuter bus and four passengers died and 10 people were injured in the collision.

The school bus was operated by AA Affordable Transportation, a firm that has a contract with Baltimore City Public Schools to transport students who are homeless, have special needs or require some other specific assistance from the system, school officials have said. Company officials at AA Affordable could not be reached for comment on Thursday through phone messages left with the Baltimore firm.

In a statement Thursday, the Maryland Motor Vehicle Administration, said that, effective Sept. 1, “Glenn R. Chappell was no longer authorized to drive a commercial motor vehicle because he failed to provide an updated Medical Examiner’s Certificate, which expired” on Aug. 31.

The MVA said in the statement that the agency had sent Chappell a warning letter in July and again in September about the consequences to his commercial licensing if he did not provide the medical certificate.

The state said in the statement, released through spokesman Charles Brown, that based on federal regulations, employers are required to maintain a Medical Examiner’s Certificate, which includes the date of expiration, for all of their CDL drivers.

Brown said in the statement that the MVA “is actively assisting law enforcement’s bus crash investigation.”

Authorities, including the National Transportation Safety Board, are working to determine the cause of the crash and may have recovered video from the MTA bus that could help the investigation.

The deadly collision occurred after the school bus crashed into a gray Mustang and a stone pillar before slamming into the commuter bus with 13 on board, according to Baltimore police. Police have said investigators were trying to determine whether Chappell had a medical condition that would explain why it appears the school bus did not stop during the series of crashes.