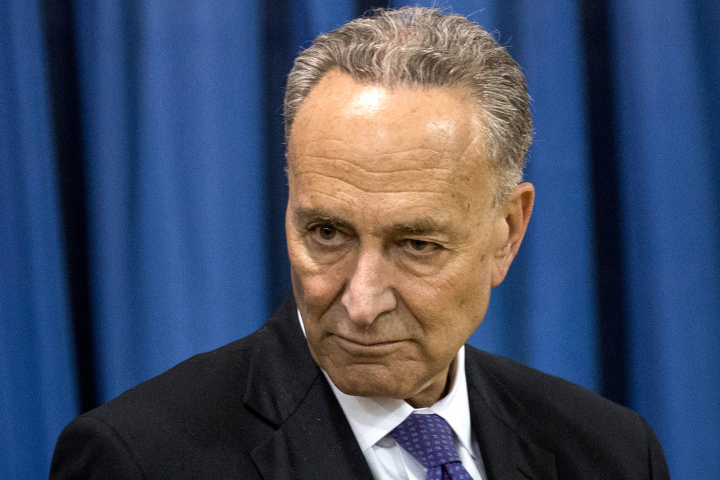 SCHUMER: “It’s hard for me to imagine a nominee that Donald Trump would choose that would get Republican support that we could support.”

MADDOW: “And so you will do your best to hold the seat open?”

Two things about this:

1) Yes, legally and procedurally, Senate Democrats can probably block Trump’s pick indefinitely. Unless Republicans get rid of the filibuster for Supreme Court nominees, Trump’s pick will effectively need 60 votes to get through, and Republicans only have 52 members.

Also, the Constitution says says the Senate “shall advise” the president, which over time we’ve taken to mean will approve or disapprove of. But Russell Wheeler of the Brookings Institution says there are very few courts that would interpret “shall” as “must”.

2) Politically, Senate Democrats don’t have nearly as much cover as Republicans did last year to block a president’s Supreme Court nominee. Which means their attempts to do so could backfire, and potentially even do more harm to their already grim hopes in 2018 of trying to take back control of the Senate.

For one, blocking Trump’s pick would be a complete and total reversal of their position from just a few months ago, when Senate Democrats thought they’d have a Democrat in the White House. Many Senate Democrats are on record this past year arguing it’s the Senate’s job to consider a president’s nominee.

Schumer is very much on that list. Earlier this year, Republicans pointed to a 2007 speech Schumer gave where he said the Senate shouldn’t confirm a Supreme Court nominee from President George W. Bush “except in extraordinary circumstances” as rationale for their own blockade.

Schumer bristled at that characterization of his words, calling it “completely misleading and patently false” — he at least would have held hearings for a Bush nominee, he wrote in a Medium post. He went on to write:

“The wisdom of the Founding Fathers dictates that we should go through a full vetting and confirmation process so that we and the nation can determine whether these candidates are out of the mainstream even in this ideological era.”

Democrats could try to uphold Schumer’s words by going through the motions of considering Trump’s nominee. But Schumer made clear to Maddow this week that their ultimate goal is to keep the seat open, and that’s pretty clearly the opposite of what Schumer has argued in the past.

Democrats surely noticed that Republicans didn’t get punished in the polls or at the polls for obstructing President Obama’s pick to replace the late Justice Antonin Scalia for more than 200 days. And that’s true. Democrats tried to make the obstruction a major issue in their attempt to take back the Senate; it didn’t work.

Polls throughout 2016 showed voters didn’t like the fact Republicans were blocking their pick, but voters weren’t going to make it their top priority in the voting booth or anything.

But just because Republicans got away with it doesn’t mean Democrats can. Republicans were able to prop up their obstruction with a thinly veiled rationale: It was the very end of Obama’s term, and the voters should get to decide who sits on this court by picking the next president.

Now there’s not a looming presidential election for Democrats to hang their blockade on. We don’t have polling on Schumer’s just-floated idea, but it’s not hard to envision the scenario where a blatant political gamble by Democrats could push voters’ apathy about the vacant seat into antipathy. Sure, it worked for Republicans. But in politics, as in life, past performance is no guarantee of future results.

The current court has already opted not to take up some pretty big decisions on such issues as President Obama’s immigration reform and teachers union fees. Some of those non-decisions favored Republicans, others Democrats.

Americans were largely apathetic about all that, choosing to keep Republicans in control of Congress. But could you imagine another few years of deadlocked or non-decisions? That is objectively unsatisfying — and it’s possible that Americans might start to care a lot more about how many justices are on the Supreme Court.

Which would be really bad timing for Senate Democrats. They already have an absolutely terrible — possibly historically terrible — map in 2018. They’re defending 10 seats in states Trump carried in November; half of those states Trump carried by double-digit margins. Meanwhile, Republicans have very few vulnerabilities. The last thing Senate Democrats need is a Supreme Court obstruction drama that voters actually care about.

In sum, Democrats have the legal and procedural right to block Trump’s nominee, and they have options to do it. But politically, all roads appear to lead us back to this: Democrats just don’t have political cover to block Trump’s Supreme Court nominee.

But it sounds like they’re going to try anyway.