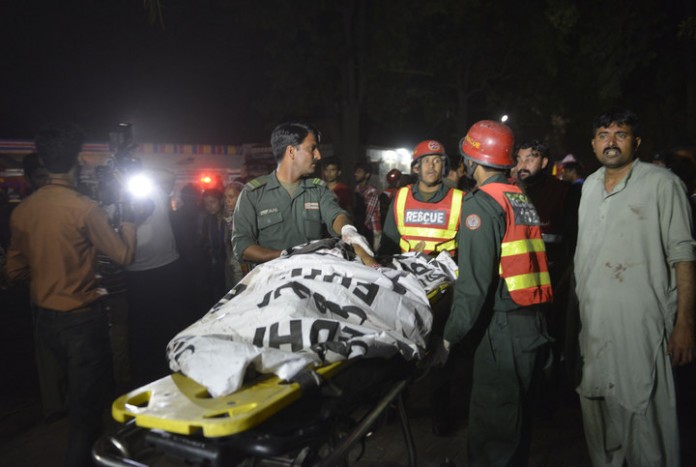 >>Follow Matzav On Whatsapp!<<
An explosion ripped through crowds of families gathered at a public park in the eastern city of Lahore, Pakistan, today, killing at least 60 people and injuring 300, according to local officials.

The attack appeared to have been carried out by a suicide bomber in the parking lot of Gulshan-e-Iqbal Park, a vast space where families had flocked to picnic and celebrate a holiday. Police said most of the dead and injured were women and children, according to the Reuters news agency.

Three days of mourning were announced by the government of Punjab province, where the attack occurred and which is Prime Minister Nawaz Sharif’s stronghold. A statement from the office of Punjab’s chief minister, Shahbaz Sharif, who is the prime minister’s brother, has pledged to ensure that the culprits are brought to trial, the Associated Press reported.

Pakistan has suffered for years from Islamist militancy, including a Taliban insurgency in the tribal areas along the Afghanistan border.

On Sunday, witnesses described body parts scattered in the wake of the attack, which occurred near one of the park’s many exit gates, Pakistan’s Dawn newspaper reported. Images posted on social media showed panic and chaos in the moments after the blast and medics ferrying the wounded away on stretchers.

Lahore’s top security official, Haider Ashraf, told local media that both Christian and Muslim families had gone to the park to celebrate the holiday weekend. It was unclear Sunday whether the attack specifically targeted Christians, who make up about 1 percent of Pakistan’s population of 190 million. The Christian community has maintained a larger presence in Lahore, analysts say.

Punjab is the wealthiest and most populous province in Pakistan.