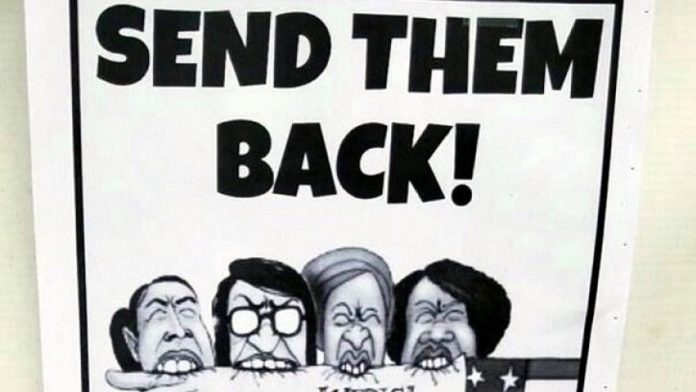 Police from Seattle’s bias crimes division are investigating after racist fliers were found outside at least two synagogues in the city on Tisha B’Av, a Jewish national day of mourning.

According to the Seattle Police Department, officers were called to a South Seattle synagogue around 10:30 on Sunday morning after people saw a man wearing a mask outside the building. Congregants also found a flier taped to the door.

The flier, which has the words “Send Them Back” in bold letters, appears to depict four female U.S. Democratic congresswomen: Rep. Rashida Tlaib (D-Mich.), Rep. Ilhan Omar (D-Minn.), Rep. Ayanna Pressley (D-Mass.) and Rep. Alexandria Ocasio-Cortez (D-N.Y.). Ocasio-Cortez dubbed them “The Squad” shortly after they began their terms in January.

In the drawing, the women are shown biting an outstretched arm with stars and stripes, with the word “America” written on the skin. Beneath the drawing are the words “Deport the Commie Brown Infestation.”

The letter concludes with a URL address for The Daily Stormer, a neo-Nazi, hate-filled website.

In a release, Miri Cypers, the Pacific Northwest Regional director of the Anti-Defamation League said:

“We are deeply troubled by the recent string of anti-Semitic and anti-immigrant flyers being posted at synagogues and churches across the Seattle area. This past weekend, a white supremacist group targeted synagogues in the Seward Park community with racist, anti-immigrant propaganda as part of an ongoing coordinated effort.”

Jonah Spangenthal-Lee wrote on the Seattle Police Department online news blotter that a “witness reported seeing a white male wearing a black baseball hat, a black face mask, dark aviator sunglasses, a black zip-up hooded sweatshirt, carrying a black suitcase outside the synagogue around the time the flier was found.”

Police patrols have been beefed up in the area.