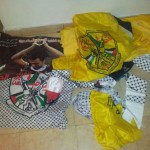 The Capital’s police announced today (May 28) they have arrested nine Arabs in connection with the recent surge of anti-Israel violence in the city. The arrested terrorists come from the villages of Abu-Dis and Izariya in east Jerusalem. Another two were detained for questioning.

Some 200 Border Policemen participated in the operation. The operation was executed on the basis of intelligence collected prior to the arrests.

In the past months there has been a sharp increase in violence against Israelis in Jerusalem that include public disturbances and rioting, especially in the areas from which the nine terrorists came. Some of the arrested were also charged with the damaging of the security wall and the throwing of Molotov cocktails and improvised explosive devices.

Brigadier General Uzi Levy, who commanded the operation, stated: “In the past months we have lead similar operations which have brought to the capture of terrorists and rioters. Israel’s Police will continue to operate with decisiveness against those who wish to harm the citizens of Israel and its security personnel, ensuring the safety of the state and its citizens.”