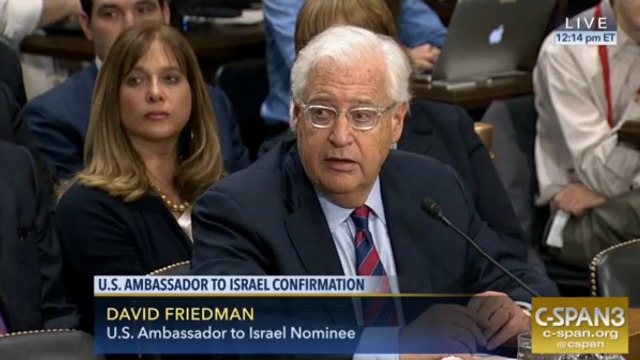 President Donald Trump’s controversial pick to serve as U.S. ambassador to Israel earned the support of the Senate Foreign Relations Committee on Thursday with all but one Democrat opposed to his nomination.

David M. Friedman’s bid to serve as the next ambassador to Israel will now go to the full Senate.

But the 12 to 9 split over his nomination in committee is a sign that partisan divisions will hang over Friedman’s confirmation process going forward, and possibly his expected tenure as ambassador as well.

Only one Democrat – Sen. Robert Menendez of New Jersey – voted in favor of Friedman’s nomination Thursday. The others argued that Friedman’s record of incendiary comments made him unfit for the post, despite his efforts to retreat from some of his more fiery statements during last month’s confirmation hearing.

“The region is incredibly volatile. The last thing we need in this position is somebody who has a penchant for over-the-top, hyperbolic and even false statements,” said committee member Tim Kaine, D-Va. “There will be a volatility to his holding this position that is exactly the wrong ingredient to put in this important relationship and this region of the world.”

Sen. Benjamin L. Cardin, D-Md., the committee’s top Democrat, said Wednesday that he would not vote in favor of Friedman, citing concerns with several statements Friedman made charging various politicians with anti-Semitism and a lack of support for Israel, as well as Friedman’s position on the Israeli-Palestinian peace process.

Cardin based his opposition on written comments Friedman has made discrediting the two-state solution for the Israeli-Palestinian conflict. He argued that those remarks would “make it difficult for him to have that type of credibility as a unifying force for the support of Israel in our American political system.”

“The problem that I have is that certain stakeholders who must be part of the peace process will look to his writings and will have a hard time looking at him as a facilitator for a level playing field negotiation for a two-state solution,” Cardin told reporters.

Friedman, who worked as a lawyer in New York, has written that the pursuit of a Palestinian state is a “damaging anachronism” – comments that were based, he explained during his committee confirmation hearing last month, on his “skepticism” about whether Palestinians were really willing “to renounce terror and accept Israel as a Jewish state.” He also attempted to back off from his stance, telling senators that maybe such problems could be remedied and that he “would be delighted” to see a mutually agreeable peace arrangement.

A two-state solution for Israel and the Palestinians has been U.S. diplomatic policy for peace negotiations for decades, though then-Secretary of State John F. Kerry said late last year that Israel’s continued settlement-building has put that solution in “serious jeopardy.”

In a potentially significant shift last month, Trump publicly stepped back from the two-state goal, indicating that he would be satisfied with other arrangements as well.

Friedman’s position on the two-state solution has not been his only problem before the Senate, however.

Many other Democrats expressed their revulsion over other comments and insults that Friedman has directed toward Barack Obama, top Senate Democrat Charles E. Schumer, N.Y., and others with whom he has disagreed over various Israel-related policies, such as the Iran nuclear deal that Israel opposed. Schumer has not said how he intends to vote on Friedman’s nomination; both he and Cardin voted against the Iran deal in 2015.

“I regret the use of such language,” Friedman told the committee repeatedly, and in various ways. He said he would not try to rationalize or justify his more incendiary statements and sought to assure members that he would be more composed and circumspect as a diplomat.

Committee Chairman Bob Corker, R-Tenn., who voted for Friedman’s candidacy, noted during the confirmation hearing that Friedman’s appearance before the committee was effectively an effort “to recant every single strongly held belief that you’ve expressed, almost.”

Corker said at Thursday’s vote that he thinks Friedman “views this opportunity as a calling.”

Others were not convinced that Friedman’s gesture at contrition would erase the impact of his words at home or abroad. Protesters booed the mention of Friedman’s name at Thursday’s confirmation vote, and lobbyists opposed to Friedman’s nomination leapt on the 9 “no” votes to try to appeal for more defections on the Senate floor.

Dylan Williams, a vice president with the Jewish lobbying group J Street – which Friedman once compared to “kapos,” Nazi concentration camp prisoners who worked with guards – called the no votes “a clear signal that [Friedman] is a completely inappropriate and disastrous choice for such an important position.” He urged other senators to oppose Friedman’s nomination on the floor to send another “clear message” – though Friedman’s nomination is expected to secure enough votes for his confirmation.

Cardin said Wednesday that he did not expect divisions in Congress and among Jewish lobbying groups to affect any other Israel-related measures going forward.

“I am confident that the overwhelming majority of the members of Congress are very supportive of Israel-U. S. relations,” he said – a sentiment that Sen. Lindsey O. Graham, R-S.C., who introduced Friedman at his confirmation hearing, also stressed and shared.

It is not possible to judge whether Friedman’s rocky confirmation process will affect the fate of other Trump ambassadorial nominees. As of early this week, the Senate Foreign Relations Committee had not received the vetting paperwork necessary to schedule any of the handful of ambassadors Trump has announced for a confirmation hearing.