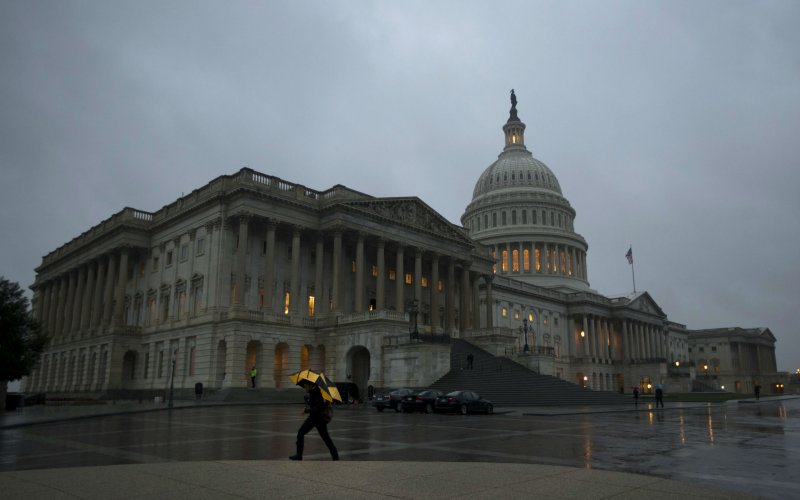 After a frantic round of negotiations, Republicans came together in near unanimity behind the landmark legislation. The final vote was 51 to 49, with Sen. Bob Corker, R-Tenn., the lone GOP holdout. No Democrats voted for the bill.

The measure still has to be reconciled with an earlier House-passed version before being sent to President Trump. Yet in getting the bill through the Senate, Republicans succeeded where they failed earlier this year, when their efforts to repeal the Affordable Care Act collapsed in mortifying fashion.

This time, urged on by donors and fearful of facing voters in next year’s midterm elections without a legislative achievement to show, Republicans said time and again that failure was not an option.

The centerpiece of the GOP plan is a move to lower the corporate tax rate from 35 percent to 20 percent, starting in 2019. The Senate tax bill would also temporarily cut tax rates for families and individuals until 2025.

But the bill would kill a number of tax benefits. It would subject fewer people to the estate tax, a levy charged on massive inheritances, but stop short of eliminating that tax altogether.

The most recent review of the bill by the Joint Committee on Taxation, Congress’s nonpartisan tax analysts, found that only 44 percent of taxpayers would see their burden reduced by more than $500 in 2019 but that high earners would fare much better than the poor under the bill.

And the bill makes other changes that reach far beyond the tax code itself. It repeals the individual mandate from the Affordable Care Act, a major change that was added in recent weeks as part of a broader GOP effort to dismantle the Obama-era law. The individual mandate creates penalties for many Americans who don’t have health insurance, but the repeal would leave 13 million more people uninsured. It authorizes oil drilling in the Arctic National Wildlife Refuge in Alaska. And by curtailing deductions for state and local taxes, it will put pressure on some state and local spending on education, transportation and public health programs.

The tax package still must clear a couple more hurdles before it can become law. There are numerous differences between the House and Senate versions, ranging from when certain tax cuts expire to how the estate tax is handled, and though none are seen as show-stoppers, complications could arise. There will be major implications for the taxes paid by families and individuals based on how those discussions go. And the negotiations over the tax bill will proceed as Congress simultaneously faces a Dec. 8 deadline for government funding to expire.

Nonetheless, GOP leaders still aim to get a final bill on Trump’s desk before Christmas.

For Trump, a victory on the tax plan would stand as a signal triumph, in sharp contrast with the political troubles besetting the White House on other fronts, especially with the Senate action coming on the same day on the heels of the news that former national security adviser Michael Flynn pleaded guilty to lying to the FBI about his contacts with the Russian ambassador.

The concessions made to get them on board forced GOP leaders to add more than $250 billion in tax cuts for individuals and businesses to their plan. To offset some of these costs, they had to abandon efforts to fully repeal the alternative minimum tax for individuals and companies, instead scaling it back.

The AMT was put in place in the 1980s as a way to prevent wealthier Americans from using tax deductions to avoid paying taxes.

Flake announced his “yes” vote after he said he had secured leadership backing for two priorities: one related to how businesses can deduct major investments like equipment purchases and the second involving a solution for immigrants brought illegally to the United States as children.

“Having secured both of those objectives, I am pleased to announce I will vote in support of the tax reform bill,” Flake said in a statement.

Flake said his deficit concerns were allayed by a new approach to the bill’s expensing deduction, which allows businesses to write off the full cost of investments in equipment and facilities. The change calls for gradually phasing out the break after five years instead of abruptly canceling it. That adds $34 billion to the cost of the bill, but Flake said it would save money in the longer term by making lawmakers less likely to extend the break in the face of pressure from business interests.

Flake also said the administration and Senate leaders had agreed to work with him toward a resolution for immigrants brought illegally to this country as children. Known as “dreamers,” these immigrants were granted temporary protections under the Obama administration, which Trump has announced he will revoke in March.

Flake is a longtime proponent of reforming immigration laws and wants permanent protections for dreamers. He said Vice President Pence had committed to working with him on the issue, though without offering a timeline or a specific solution.

Johnson came on board after leadership sweetened the deal for certain businesses whose owners pay taxes through the individual code rather than at corporate rates. Johnson retains partial ownership in one such “pass-through” business, and the issue has been a key concern.

“I appreciate the Senate leadership’s willingness to work to close the gap between pass-through businesses and C corporations,” Johnson said. The term C corporations refers to those businesses that file their taxes on the corporate side of the code.

Senate GOP leaders had proposed allowing pass-through owners to deduct 17.4 percent of their income from their taxes and then pay taxes on the remaining income. Johnson and Sen. Steve Daines (R-Mont.) argued for days that this was not generous enough for these businesses, and GOP leaders reluctantly raised the deduction level to 20 percent, which added roughly $60 billion to the size of the tax cut. But Johnson continued holding out, and on Friday he said the deduction had been raised to 23 percent, securing his support.

That meant that he and Daines were able to extract $114 billion in tax cuts for these firms in just a few days.

Collins said leadership had promised her the bill would protect certain deductions individuals use to lower their tax bills, including on matters related to medical expenses and tax payments to state and local governments. Collins also said leadership had agreed to support passing two bipartisan bills to help stabilize the health insurance system set up under the Affordable Care Act.

Senate leaders had little margin for error, since they can lose only two GOP votes and still prevail in the closely divided chamber. Democrats were unanimously opposed to the bill, and took turns Friday delivering scorching floor speeches slamming it as a giveaway to the rich.

And as evening wore into night Friday with Republicans still fine-tuning the final language of the bill, Democrats exploded in outrage when Sen. Claire McCaskill, D-Mo., said she received a list of planned changes from a lobbyist and not from Republicans in the Senate who were keeping all their decisions closely held.

A few minutes later, a 479-page draft of the changes leaked out to the public. It included several pages of hand-written changes to the bill. Democrats, who were effectively powerless in trying to stop the bill’s passage, tried to cast the last-second changes as boondoggles for corporations which had not been debated or explained.

Some of the hand-written changes were crammed in the margin and hard to decipher.

Sen. Jon Tester (D-Mont.) posted a video of himself on Twitter acting incredulous as he slammed the bill down on a table.

“This is your government at work,” he said in disgust.

Friday’s progress was a turnaround for Republicans after the bill hit snags Thursday. An unfavorable economic analysis had inflamed Corker, who was demanding assurances that the bill will not add to the deficit. Corker wanted a “trigger” added to the bill to kick in and raise rates if growth projections weren’t met, but the Senate parliamentarian ruled his plan unworkable under the complex rules governing the legislation.

The result was a tense standoff Thursday evening, as Johnson, Flake and Corker threatened a last-minute objection to stop the tax bill from passing. This forced GOP leaders to scramble to try to accommodate some of their concerns, before the lawmakers finally relented.

Negotiations went through the night, but on Friday it emerged that Corker’s demands had not been met. There will be no “trigger” in the bill, nor any other mechanism to make up for a $1 trillion deficit increase that congressional scorekeepers say will result from the bill, even when taking into account economic growth.

Corker was grim-faced as the outcome became clear.

“I am disappointed. I wanted to get to yes,” he said in a statement. “But at the end of the day, I am not able to cast aside my fiscal concerns and vote for legislation that I believe, based on the information I currently have, could deepen the debt burden on future generations.”

Sen. James Lankford, R-Okla., who had also pushed to address deficit issues, said he was disappointed there would be no mechanism to do so but insisted the bill would produce more growth than most analysts have suggested.

“I think it’s a stronger bill with a safety net, the just-in-case piece. But that’s not what we have,” Lankford said. “I’m going to be ‘yes’ either way. It’s walking the tightrope with a net or without a net. You prefer to have a net, but I think it’s going to work.”

With the bill on the floor, senators offered amendments from both sides Friday and into Saturday, but they were largely disposed of in predictable partisan fashion.

GOP leaders had feared trouble from an amendment pushed by Sens. Marco Rubio, R-Fla., and Mike Lee, R-Utah, to further expand the child tax credit for low-income families. To do so, they proposed slightly increasing the corporate tax rate, moving it back up to 22 percent, a change opposed by fellow Republicans. GOP leaders were concerned Democrats would vote for the amendment and that it would pass, creating a new headache for leadership.

But in the end the Rubio-Lee amendment failed by a wide margin, 71-29. Rubio and Lee had scaled their measure back in an effort to draw GOP support, but that didn’t work. Instead they drove away Democrats, who were mostly not eager to add a bipartisan veneer to a bill they oppose anway. A more robust Democratic version of the amendment also failed.

There was a moment of drama during amendment debate over a measure by Sen. Ted Cruz, R-Texas, to bring the Senate bill in line with the House version by expanding the use of education savings accounts to allow them to apply to expenses for religious schools and homeschooled students. The amendment stood at a vote of 50-50 after Collins and Sen. Lisa Murkowski, R-Alaska, joined all Democrats in voting “no.” Vice President Pence was summoned and broke the tie in favor of Cruz.

Democrats did secure one small victory in the debate. With the help of four Republicans, Sen. Jeff Merkley, D-Ore., prevailed with an amendment striking a controversial provision related to the taxation of endowments that Democrats charged was written to benefit one small but influential conservative college, Hillsdale College in Michigan.