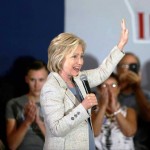 In a “serious risk” to national security, Hillary Clinton gave her State Department emails containing Top Secret and other classified information to her lawyer, who lacked sufficient clearances to possess it and who kept it for as long as eight months, the Republican Chairman of the Senate Judiciary Committee charged Tuesday.

In a letter to her successor Secretary of State John Kerry, Sen. Chuck Grassley of Iowa said when she turned over thumb drives containing her official emails to her lawyer, “it appears Secretary Clinton sent (Top Secret/Sensitive Compartmented Information) to an unauthorized person.”

Grassley, who has sent multiple demanding letters in the controversy over Clinton’s use of a private email server, said: “The transmission of classified material to an individual unauthorized to possess it is a serious national security risk (and) it raises legitimate questions as to whether the information was properly secured from foreign governments and other entities.”

David Kendall, the prominent Washington attorney who has represented Clinton for 20 years or more, had written Grassley just a day earlier that when Clinton turned over her 30,490 official emails to the State Department on Dec. 5, 2014, “none of those emails was classified.”