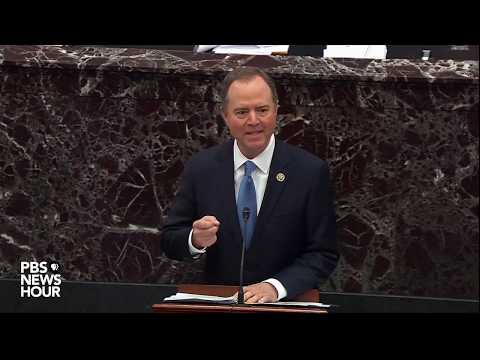 Schiff quoted Putin saying he “thanked God” that people were blaming Ukraine, instead of Russia, for meddling in the U.S. elections. Democrats say the debunked conspiracy theory has been perpetuated by Trump for his personal and political gain.

“You got to give Donald Trump credit for this. He has made a religious man out of Vladimir Putin,” Schiff said, eliciting laughs. “But I don’t think we really want Vladimir Putin, our adversary to be thanking God for the president of the United States, because they don’t wish us well.”

House managers have been allowed 24 hours over the course of three days to present their case. The White House will then make its defense. The House of Representatives impeached the president in December on two articles — abuse of power and obstruction of Congress. The trial will determine whether Trump is convicted of those charges and removed from office, or acquitted.