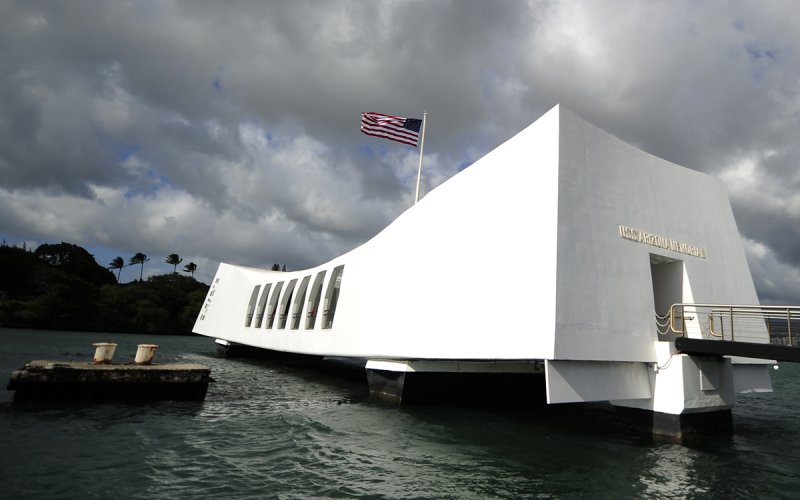 PEARL HARBOR, Hawaii – Seventy-five years after Japanese warplanes streaked over the hills here, laid waste to the harbor, and forced the U.S. into the cataclysm of World War II, thousands gathered on a placid morning to pay tribute to those who died that day.

Many assembled on a covered pier that jutted near the spot where remnants of the USS Arizona rest just beneath the surface, unmoved since it was shattered by enemy bombs on the morning of Dec. 7, 1941, killing 1,177 sailors and Marines.

Those in attendance came from across the country – including wrinkled old men from small towns, who as young men had been here and still choke up at the memory of lost shipmates.

“They lost theirs immediately, and they’re the ones that should be called heroes,” he said.

The dignitaries assembled on flag-bedecked Kilo Pier around sunrise, just about the time the first wave of 350 enemy planes from six aircraft carriers attacked that Sunday morning, sinking the battleships Arizona and USS Oklahoma and crippling a dozen other vessels.

The attack also destroyed planes and buildings around the area, and killed about 2,400 people. Eleven hundred men were wounded.

In some ways, the morning was like the one 75 years ago, with ships tied up, and the sun turning the scattered morning clouds a pinkish blue. And, like that day, it was hard to imagine so violent an attack in such a peaceful spot.

There was moment of silence during the proceedings, broken by the flyover of roaring U.S. Air Force jet fighters, and the mournful horn of a guided missile destroyer that glided by, flying a huge American flag in salute.

All week, the community has been filled with visitors here to remember the day of “infamy,” as President Franklin D. Roosevelt called it.

Some on Wednesday wore T-shirts emblazoned with pictures of individual survivors, and the names of ships they served on.

The Navy’s Pacific Fleet Band, clad in white, played marches – an act reminiscent of the bands that were playing aboard ships as the attack began in 1941.

Pearl Harbor “survivors” have been thronged with people eager to express gratitude, grab a selfie, and hear again their stories.

Well-wishers waited in a long line to have survivor Don Stratton, 94, of Colorado Springs, Colorado, sign copies of his new memoir, “All the Gallant Men.”

Stratton, one of only a handful of Arizona survivors left, was terribly burned on the Arizona and only escaped by climbing hand-over-hand across a rope that someone had thrown from a neighboring ship.

“I got a lot of shipmates out there,” he said Tuesday, indicating the wreck in the harbor, as he sat in a USS Arizona ball cap at a book signing table at the National Park Service site here.

He owed them a salute of honor, “and I’m here to do that” he said.

Visitors also crowded around James DeWitt, 95, of Culver, Indiana, as he sat in his wheelchair at the park service site.

He had been aboard the USS Antares, a supply ship that was towing a barge into Pearl Harbor, when the attack began.

“We wasn’t going very fast, and we didn’t have an armament,” he said.

But the Antares spotted a Japanese submarine trying to sneak into the harbor, raised an early alarm, and was later assailed by enemy planes.

The Antares had been at sea for 37 days and was just arriving at Pearl Harbor – “two and a half hours ahead of the Japanese,” he said. “We never did get into the harbor.”

He said he could see the smoke in the harbor from the first wave of attacking planes, and then the Antares, itself, became a target in the second attack, he said.

“There were eight of us on the bow of the ship . . . and somebody yells . . . And we hit the deck. About that time they opened fire . . . But they were shooting at the bridge, thank goodness.”

He said he saw an enemy plane fly by. Asked what it looked like, he said, “well I didn’t get too much time to look at it . . . You could see the orange ball (insignia) under the wings.”

Conter, of Grass Valley, California, told reporters Tuesday of his last minutes on the Arizona, as the fires consumed the forward part of the ship and it gradually went under.

“We stayed on the after end, and pulled bodies and people out of the fire,” he said. “They were coming out of the fire. We laid them down on deck, and were putting them on boats to get them to the hospital.”

“After about forty minutes, we were getting water on the quarter deck up to our knees,” he said. An officer ordered “abandon ship,” he said. “We took what bodies we had, and what people we had, into the motor launch. We got them to the hospital.”

“We came back, and fought the fire until Tuesday, before we got off,” he said. “It burned for three days.”

The Japanese launched the surprise attack, hoping they could cripple U.S. forces in the Pacific, as they expanded their Asian empire.

The remnants of the sunken Arizona, spanned by a white memorial arch, now rest adjacent to USS Missouri, the huge battleship on which the official Japanese surrender took place in 1945.

The Arizona, begun in 1914, and the Missouri, begun in 1941, were both built in the Brooklyn Navy Yard and were both state of the art, in their day.

Now they are together, one sunk, one afloat, marking the beginning and the end of World War II for the U.S. and the men and women who served in it.