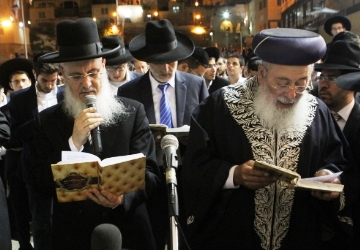 Times of Israel reports that Israel’s Religious Affairs Ministry and its Sephardi chief rabbi have issued a protest of the recent enforcement of a ban on chareidi prisoners donning hats and jackets during prayer, condemning the rule as a “violation of religious freedom.”

The prison service implemented the directive earlier this month over fears the inmates’ black civilian garb, which bears some resemblance to the guards’ black uniforms, could aid them in breaking out of prison, according to Israeli television reports.

In a letter sent on Monday to Public Security Minister Gilad Erdan, who oversees the service, Religious Affairs Minister David Azoulay (Shas) branded the new rules a “serious violation of religious freedom, which is a basic constitutional right.” He was quoting a religious opinion by Sephardi Chief Rav Yitzchok Yosef, who also sent a letter to Erdan last week condemning the new directive. “According to the Shulchan Aruch (Orach Chaim, 91), there is a matter of wearing a special garment for prayer, in order to fulfill the commandment of preparing to approach your God, Israel,” wrote Rav Yosef. “Which means that preventing prisoners who are accustomed to wearing a hat and jacket during prayers hurts their freedom of religion and worship.”