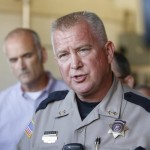 “I will not give him the credit he probably sought prior to this horrific act of cowardice,” Hanlin said. “You will never hear me mention his name.”

Hanlin added that the official identity will come from the medical examiner. Police earlier identified the shooter as 26-year-old Chris Harper-Mercer.

“Gun control is not the answer to preventing heinous crimes like school shootings,” he wrote.

Hanlin vowed he would refuse to enforce or allow the enforcement of any federal gun control, calling it “unconstitutional” and an “insult to American people.” Read more at NBC News.