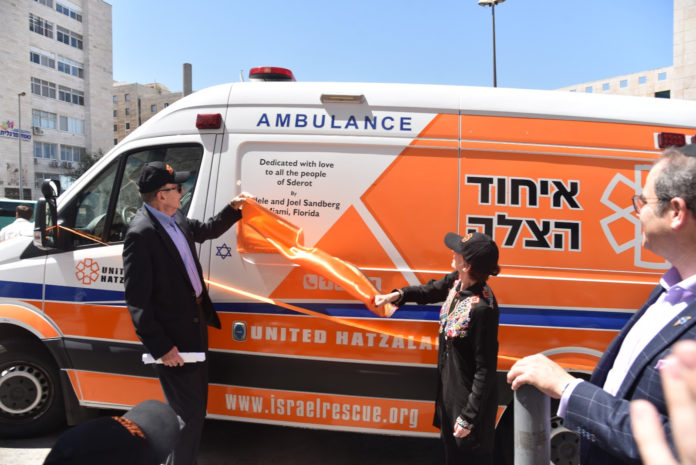 “We were proud to host the Sandberg family at our national headquarters in Jerusalem and to introduce them to our volunteers, who are the backbone of United Hatzalah,” said Eli Beer, President and Founder of United Hatzalah. “Joel and Adelle Sandberg have been big supporters of our organization. Because of their donation of an ambulance, our volunteers will be better prepared to serve the community of Sderot and the surrounding area.”

During the visit, the Sandberg family met with members of United Hatzalah’s diverse women’s unit and its founder, Gitty Beer. The women’s unit sends female EMTs to treat other women in an effort to make patients feel more comfortable, particularly when dealing with sensitive or private issues such as childbirth or miscarriage.

The Sandbergs met with volunteers Sassya Simon, an Orthodox mother of three who studied pre-med in the US; Rania Abu Shaban, a devote Muslim woman who joined the organization after her grandmother died waiting for an ambulance; and Kayla Tzur, who responds to multiple emergencies a day via electric bicycle.

“United Hatzalah’s work to quickly respond to emergencies and save lives is one of the most impressive programs I’ve ever seen,” said Sheryl Sandberg. “I’m in awe of these brave women and all of the United Hatzalah volunteers, who race toward people when they need help most.”

United Hatzalah of Israel is the largest independent, non-profit, fully volunteer Emergency Medical Service in Israel. Their services are available to all people regardless of race, religion, or national origin. The organization has more than 5,000 volunteers around the country, available 24 hours a day, 7 days a week, 365 days a year. United Hatzalah deploys unique GPS technology and their iconic ambucycles to achieve an average response time of less than 3 minutes in communities across the country and 90 seconds in metropolitan areas.