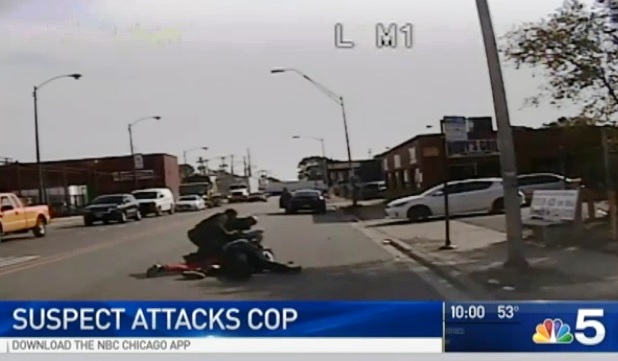 Graphic dashcam and bodycam video has been released showing a suburban man — allegedly high on PCP — punching and body-slamming Chicago police officers as they tried to handcuff him earlier this month, NBC Chicago reports.

More than three hours of footage of the brutal incident were released Friday by the Chicago Police Department after authorities said a female officer who was beaten unconscious didn’t shoot her attacker because she feared she might face backlash.

The footage begins as two officers attempt to take Parta Huff, of Maywood, into custody after he allegedly crashed his vehicle into a liquor store.

The officers in the 15th District were on patrol when they came across a traffic accident near the intersection of South Cicero Avenue and West Roosevelt Road, authorities said.

A female officer is seen in the footage cuffing Huff’s left wrist, but is heard shouting at him to stop fighting before she can get his right wrist cuffed.  The officer is shouting at her partner to “Taser” the man as both officers continue ordering him to “stop fighting” and “get down on the ground.”