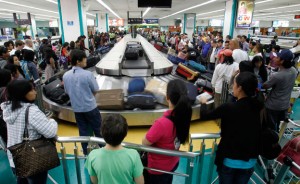 When customs workers at Ben Gurion Airport received a sealed package from Russia Tuesday morning, the last thing they expected to encounter was the body of a woman packed inside. The woman’s body was discovered without any documentation or certification and with no explanation as to why the body was sent to Israel.

The customs workers immediately contacted the Israeli Foreign Ministry and ZAKA representatives, who located the body’s origin in Russia. The ZAKA Commander in Russia, Rabbi Yehoshua Deutsch, inquired about the matter with the Jewish community in Russia and managed to identify the deceased and her family.

After identifying the body, ZAKA and the Israeli Foreign Ministry started to run the procedure necessary in order to bring the body to burial in Israel. “There are many bureaucratic problems that must be taken care of in a situation like this,” Foreign Ministry official Alon Lavi explained. “You need approvals for burial in Israel, confirmation of the cause of death and authorizations from the embassies on both sides.”

This case may seem to be quite unusual, but ZAKA explained that this was not the first time such an incident had occurred. “Several times a year, we encounter cases of members of the Jewish diaspora who wish to be buried in Israel,” ZAKA’s spokesperson noted. “Two years ago there was a similar case, in which a man whose mother passed away tried to transfer her to Israel, but seeing that it was expensive he bought a ticket to Israel and sent his mother in a suitcase. The body was only discovered when he tried to enter Israel.”

After several hours of work in cooperation with Russian Authorities, the body was released this evening from Ben Gurion Airport in order to be buried in Ashdod.