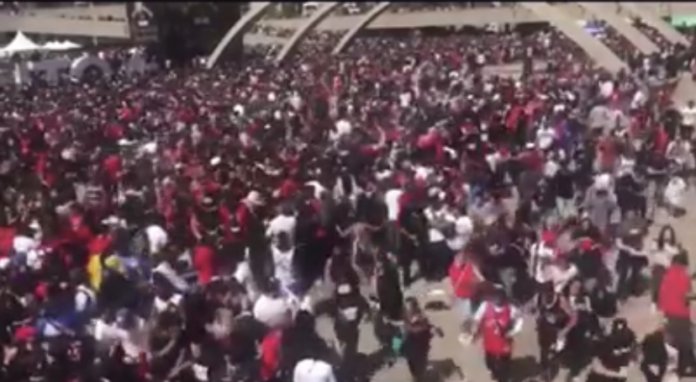 In the moments after the shooting, police said a woman was shot and reported people running from the area. Thirty minutes later, the department said authorities had located two victims with injuries deemed “serious but not life threatening.”

The shooting took place in the vicinity of Bay and Albert streets, according to police, which intersect east of Nathan Phillips Square. Toronto Old City Hall is located on Albert Street.

The Toronto Police and emergency services were on the scene, according to officials.

One witness told Bruce Arthur, the Toronto Star sports columnist, that four shots had been fired, with a victim down receiving medical attention and surrounded by onlookers. Others in the crowd began to run and police were clearing the area while speeches on the stage continued.

The victory parade started at 10 a.m., and wound through the streets of Toronto, with the Nathan Phillips Square being the final destination. A stage had been erected there, and players arrived at the stage after 2 p.m., later than expected because of the massive crowds thronging and clogging the streets.