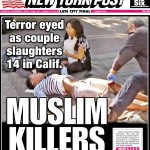 Syed Rizwan Farook, one of the suspected attackers in the San Bernardino, California, shooting that left 14 people dead, traveled to Saudi Arabia in the spring and returned with a wife, according to a co-worker.

Patrick Baccari said Farook was away for about a month. When he returned, Baccari had learned that Farook had married, and a woman he described as a pharmacist arrived shortly afterward. The couple had a baby later this year, he said.

Baccari, who suffered minor wounds from shrapnel, said he had been sitting at the same table as Farook at the office party on Wednesday when his co-worker suddenly disappeared. He added Farook showed no signs of unusual behavior. Read more.