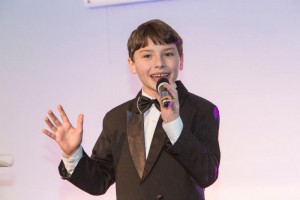 Performing is my life and the applause keeps me going, but the applause I received last year from my class was the one that made the proudest yet! It was at our 6th grade Chumash Siyum which was scheduled for 2 pm on one Thursday afternoon in early June.

Now, what happened was that I had eaten a salami sandwich for lunch at about noon. I hadn’t realized that they were going to be serving pizza at the party. Not just any pizza; pizza with every choice of topping from my favorite eatery in town.

I was in a pickle. Should I eat the pizza oozing with cheese and sprinkled with sautéed onions and eggplant? It really smelled heavenly and nobody else would know the difference. As the pie made its way around the table, I weighed my options.

It suddenly dawned on me that the pizza was there to celebrate our Torah learning. What good was it to learn the Torah without keeping its laws? It was undoubtedly clear that I would have to turn down the slice.

At some point, my teacher noticed that my plate was empty and asked me why I was not participating in the celebration. When I explained that I had eaten meat, the entire class gave me a standing ovation!

As I mentioned, I am accustomed to applause. I am a professional singer and dancer and have performed internationally many a time. (Some of you might even remember my performance and the British Friends of Shuvu Gala Dinner last year.) But this applause was something else, something different, something meaningful. This applause made me realize that I personally accomplished something. I was not merely receiving applause for using a G-d given talent. I had courageously stood up to a challenge, and for that I felt like a million dollars!

At our graduation ceremony, I asked to join the acclaimed singer Yoni Elitzur up on stage and I requested to sing my favorite song – “Baruch Hu Elokeinu Shebra’anu Lichvodo, Vehivdilanu min Hato’im!” My class exuberantly sang and danced along with us to these very meaningful words.

My mother says that, until I was enrolled in Shuvu, I was arrogant, lacking basic Derech Eretz with no deference to my parents. Additionally, I insisted on having very long hair. Now I truly respect them and overall I am much more of a Mensch. I even cut my hair short! After learning about Hashem and the Torah my life has surely changed.

Shuvu is now celebrating its 25th Anniversary since its founding in 1990 by Moreinu Horav Avrohom Pam, zt”l. Over that period there have been many challenges to overcome, but, also a tremendous amount of nachas as we see Rav Pam’s dreams being fulfilled. Mproud to present a series of nachas stories told in first person by the participant themselves so that you can see for yourself what Shuvu has been able to accomplish with your help.