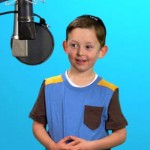 On Friday, September 25th, Sony Pictures will release a new film. The film boasts various actors, including Asher Blinkoff – a six and a half year old Orthodox Jewish kid.

Asher’s dad, Saul Blinkoff, is an animator and film director. Asher’s mom, Marion, has worked for many years as an Associate Producer for Disney and Nickelodeon.

While Asher’s interest in a job may have come from his mom and dad, he had to audition like everyone else. Sony really liked his read as ‘Dennis,’ the adorably cute half-human, half-monster grandson of Dracula. He then went to Sony for an in-person callback with Jewish director Genndy Tartakovsky. They loved the unique sound of Asher’s voice as well as his ability to take direction. One week later, his agent called to say Sony Animation wanted Asher as the voice of Dennis, and he was booked.

Next came long production days and hard work. Asher who had to work production around school and Shabbos and Yom Tov got lucky working with Sony. They were incredibly flexible and always made sure to schedule the Friday voiceover sessions to be over before Shabbos. And when Asher told them he keeps kosher, they were even sensitive enough to stock up on special snacks and drinks in the recording studio.

One of the people working at Sony had held up an apple juice box from Trader Joes and asked “Is this kosher?” It was…and so were the Lays potato chips and mini chocolate they provided.

Asher was always on his best behavior and never without his yarmulka and tzitzit, even on the behind the scenes footage on the DVD. He also hopes to continue to work on more projects, and has already had the door opened to other voiceover jobs thanks to his role as Dennis.

Read more at Jew in the City.