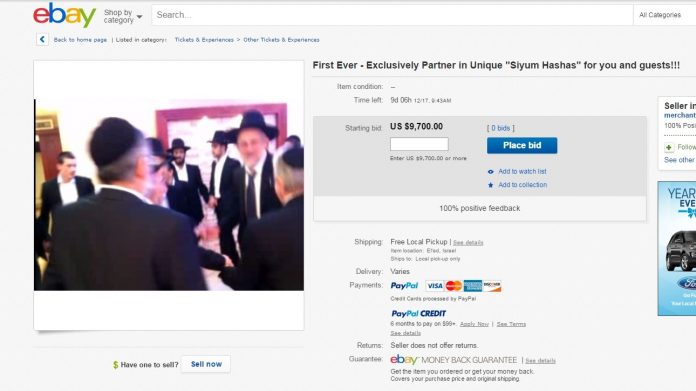 The following listing appears on eBay, with the bidding set to end on December 17.

THIS FIRST EVER AUCTION OF ITS KIND FOR A UNIQUELY PERSONALIZED TALMUD PARTNERSHIP EXPERIENCE WHICH FULLY INCLUDES ALL OF THE FOLLOWING AT NO EXTRA CHARGE:
* YOU BECOME THE EXCLUSIVE, FIRST EVER, AND SOLE PARTNER IN INVESTING IN A SINGLE-HANDED, SOLO-STUDY OF THE ENTIRE BABYLONIAN TALMUD
* YOU ARE INVITED AS THE EXCLUSIVE GUEST OF HONOR AT A FULLY CATERED “SIYUM HASHAS” CELEBRATION RECOGNIZING YOUR GROUND-BREAKING PARTNERSHIP
* YOU WILL BE ABLE TO INVITE A GENEROUS NUMBER OF FAMILY, FRIENDS AND GUESTS TO SHARE IN YOUR CELEBRATION
* YOU WILL BE PRESENTED WITH AN AWARD COMMEMORATING YOUR FOUNDING ROLE IN PROMOTING A NEW, PERSONALIZED, ERA OF TALMUD PARTNERSHIP
BACKGROUND:
The Babylonian Talmud, written in 2,711 pages of Judaeo Aramaic is ordinarily studied and completed by individual Torah scholars in a minimum of 7 years.
Only rare and leading Torah Giants such as HoRav Chaim Kanievsky individually complete it in as little as one year.
There is a long history of sponsorship of Talmud completion dedicated in the memory of the departed or in honor of donors and sponsors.
However, until today, sponsorship of completion of the entire Talmud, often needed at less than a year’s notice, has, by necessity, involved joint sponsorship by multiple parties and its study has, by necessity, been divided among multiple Torah scholars – each of whom study only a fraction of the entire Talmud during the allotted time – typically no more than one out of 63 Tractates contained in the Talmud, thus diluting each donor’s share and diluting each participant’s share.
THE WORLD FIRST THAT YOU GET:
Now for the first time in recorded History, in an all-time first for Talmud sponsorship, an accomplished Torah scholar who has already individually completed the Babylonian Talmud multiple times will, upon the completion of this auction, single-handedly complete the entire Talmud, from the very first page to the very last, in less than a year – exclusively and solely from beginning to end with the investment of one partner and one partner only – you.
In recognition of your unique partnership, at no extra charge and with no extra solicitation whatsoever you will be the Exclusive Guest of Honor at a fully catered “Siyum Hashas”.
Additionally, at no extra charge and with no extra solicitation whatsoever, you will be able to share your amazing experience with a generous number of invited family, friends and guests.
Finally, in recognition of your pioneering role in contributing towards a new trend in Talmud partnership, you will receive a commemorative award.
TERMS AND CONDITIONS
1) TALMUD SPONSORSHIP IS A PART OF JEWISH RELIGIOUS OBSERVANCE AND THUS UNFORTUNATELY AT THIS TIME BIDDING ON THIS AUCTION IS LIMITED TO THOSE WHO ARE JEWISH BY UNIVERSAL STANDARDS ACCEPTED BY ALL JEWISH COMMUNITIES.
2) THE SIYUM HASHAS CELEBRATION WILL TAKE PLACE NEAR BNEI BRAK, ISRAEL. THE WINNER AND GUESTS WILL BE FULLY RESPONSIBLE FOR ALL TRAVEL ARRANGEMENTS AND EXPENSES.
3) THE WINNER WILL BE ENTITLED TO INVITE AT NO EXTRA CHARGE UP TO A TOTAL OF 25 GUESTS. THE SELLER RESERVES THE RIGHT TO INCREASE (BUT NOT DECREASE) AT HIS DISCRETION THE NUMBER OF INCLUDED GUESTS AVAILABLE TO THE WINNER SUBJECT TO THE FINAL SELLING PRICE AND OTHER FACTORS.
4) THE SELLER WILL MAKE EVERY EFFORT TO AMICABLY RESOLVE ALL ISSUES TO THE MUTUAL SATISFACTION OF BOTH PARTIES. ANY OUTSTANDING UNRESOLVED ISSUES WILL BE REFERRED TO ARBITRATION OF THE JEWISH COURT OF LAW CHOSEN BY THE SELLER AT THE TIME OF SALE AND ALL DISPUTES WILL BE GOVERNED BY JEWISH RELIGIOUS TORAH LAW.