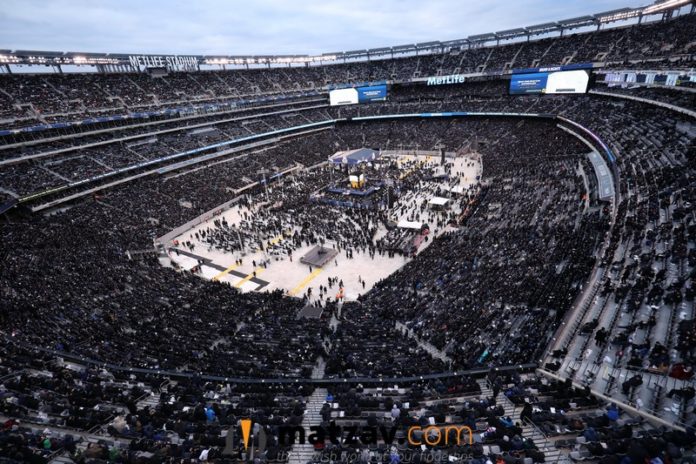 Many have asked me, “Rabbi, how was it sitting up there on the Dais for the Siyum HaShas? I heard they had the dais heated? It must have been great?”

I hate to dash people’s dreams, however, the dais was not heated.

The only heat on the dais was from Torah.

There were no special heaters.

With regard to the question of how it was it sitting on the dais, the answer in one word is “lonely”.”

I was facing the crowd with the recognition that a perpetual seen and not-seen camera was filming every move.

I was forced to remain rigid the entire time in proper rabbinic posture, which to me was a daunting challenge.

Who knew if my face would suddenly be flashed on the mammoth screens which surrounded the arena?

I felt uncomfortable and out of place on the dais.

What did I do to merit sitting here?

I also could not help but notice the constant flow of onlookers and well-wishers who made their to the dais to look at the Rabbonim and seeing who they could recognize.

Nevertheless, despite the sometimes biting cold, I continued to remain formal and rabbinically austere as I attempted to maintain my outward rabbinic appearance which felt more to me as someone masquerading in the king’s clothing.

Sitting next to me on the dais were a number of Chassidic Rabbonim and their admirers and followers came over to receive a brocha, say, “Shalom Aleichem” and photograph them to fulfill the passuk, “You will see your teacher with your own eyes.” (Yeshaya, 30:20)

I was very satisfied and content to remain an unnoticed onlooker as I observed so many wonderful children shyly approach the dais to take the picture of a well-known Rav.

Suddenly, I was distracted as I realized that a little ten-year Chassidishe boy and his father were standing in front of me. I was further bewildered as the father raised a small camera (not a phone) and aimed it at me.

There are few (if any) fluently Yiddish-speaking ten-year Chassidishe boys in Passaic.

I was sure the man and his son had confused me with another rav, so I quickly said, “bita haltn” (please wait).

I asked, “Do we know each other? Perhaps you are confusing me with someone else?

The boy however, nudged his father to take the picture and I reluctantly relented and allowed my picture to be taken.

When the boy excitedly scampered on to the dais with the camera and showed me the picture, I asked his name, he replied, “Yoiley”.

“Where do you live?” “Villyamsburg”

I then asked the question which really had me intrigued, “Ken ich dir?” “Do I know you?”

I asked this question while addressing both father and son.

The father remained silent and shuffled in place somewhat uncomfortably.

The little boy who had no social discomfort, quickly replied, “Keiner ha’at nisht genumen dyen bild…” “No one was taking your picture. So I told my father, “Lomer nomen zayn bild…” Let’s take this rabbi’s picture.”

I looked up at the young boy with the cherubic face and flowing peyos. I looked at the father with the authentic camera –not a smart-phone-camera, and suddenly my confusion vanished and clarity arrived.

In order to confirm my amazed assumption, I asked, “You mean to say, you don’t know me at all and just so I shouldn’t feel bad that no one was taking my picture, you decided to come over and photograph me?”

The father again was silent, however, his son once again spoke the truth, “Mir hobn nit vellen ihr zu feelin shlecht!” “We didn’t want you to feel bad.”

There were many thanks you and many smiles that day in MetLife stadium. However, the thank you which came out of the mouth of an amazed and surprised rabbi and the smile a ten-year-old Chassidish boy brought to the face of a sexagenarian grandfather, were to me the most precious.