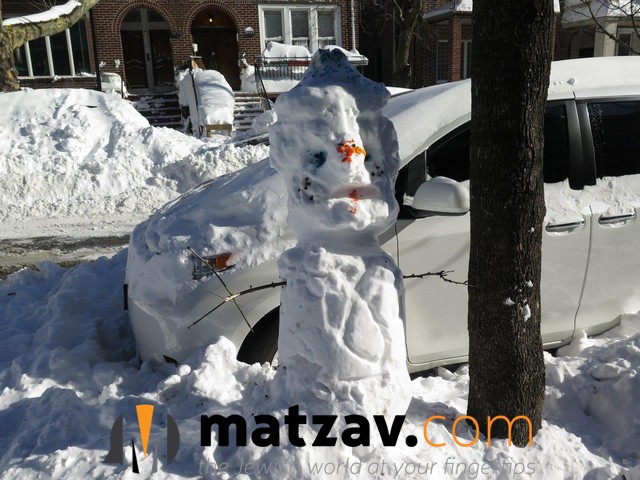 Our parents and grandparents used to regale us with tales of trudging miles and miles to school in a blinding blizzard, wind whipping at their faces, no such thing as boots or gloves.

And they arrived gratefully, taking their seats, never complaining.

These days’ kvetch about slow Wi-fi.

We’re getting soft as a nation, and so it’s no surprise that when word spread of a blizzard heading into the Northeast this week, everything started to shut down, beginning with the public-school system.

Poor Bill de Blasio. The mayor can’t catch a break. Shortly into his term he caught flack for keeping the schools open during a storm.

But this week, he found himself at a press conference defending his decision to do the opposite. Only this time the storm, as New York 1 news put it, didn’t “deliver the deep dump that had been predicted, which led some to question Mayor de Blasio’s decision to close schools, a decision he announced before the first flakes started falling.”

“I’m totally at peace … it was a straightforward decision,” the mayor told reporters, asserting that “We are not the weather experts.” That’s the job of the National Weather Service.

De Blasio was likely mindful not only of his first big blizzard experience but also the infamous 2010 snowstorm during his predecessor Michael Bloomberg’s third term, in which the Republican billionaire took responsibility for the city’s slow response to a post-Christmas storm, leaving many streets unplowed. “The results were not what we wanted them to be,” Bloomberg said then.

And so it was in the current mayor’s interest to show early on that he was on the ball and in charge before the first flurries.

Since it’s so hard for today’s kids, in the world of social media, Xbox Live and Netflix binge-watching to stay focused and productive that educators should maximize their structured time by keeping schools open as often as possible. Why not leave it to the discretion of parents whether it’s too difficult or dangerous to come in?

Those who live within walking difference, have access to sturdier vehicles, perhaps hail from countries more accustomed to colder climates or are simply more determined ought to have a chance to come in and spend their day productively. Or, at the very least, schools should maximize online tools allowing teachers to teach remotely, either via Skype, discussion groups or video content.

In our increasingly globalized world our future workers will need to up their game to turn out the best products and make our companies competitive. But in their 2017 ranking of the top countries for education, rated by global performance on a variety of metrics, U.S. News and World report placed the United States at number 7, behind Canada, the United Kingdom, Germany, Australia, France and Switzerland. While much of this ranking has to do with the quality and attractiveness of higher education, the criteria also included “a well-developed public education system.”

A poll by the Pew Research Center released last month found U.S. students “in the middle of the pack on science, math and reading scores … behind many other advanced industrial nations.” The most recent numbers showed that math proficiency has slumped after years of growth. “In the most recent tests, from 2015, 10 countries (out of 48 total) had statistically higher average fourth-grade math scores than the U.S., while seven countries had higher average science scores,” said Pew.

No, I’m not suggesting that too many snow days is responsible for the slippage, or even much of a major factor. But I am saying that part of the remedy lies in teaching kids the value of persistence at an early age.

School officials and public leaders must decide when streets are too dangerous and roads should be cleared for snow removal services. But why not open school at a later time on those days, after the plows have done their work?

We certainly shouldn’t rush to close schools when the weather reports are dubious and, when schools must close, how about offering extra credit to kids who complete online or written assignments or can make it in, or bonuses to teachers who can maximize productivity on those days.

While it’s natural for kids to be jubilant about a day off, a future CEO, doctor or president will perhaps spend part of the day at play and the rest getting ahead of the week’s lessons. Because education only works when students see it as a gift for their benefit, not an obligation to please their parents and teachers.