The soft drink industry is fighting back against New York City Mayor Michael Bloomberg’s proposed ban on large sugary drinks, by running an eye-catching, full-page ad in Sunday’s New York Times with an image of the mayor as a nanny.

The ad reads, “Bye Bye Venti: Nanny Bloomberg has taken his strange obsession with what you eat one step further. He now wants to make it illegal to serve ‘sugary drinks’ bigger than 16 oz. What’s next? Limits on the width of a pizza slice, size of a hamburger or amount of cream cheese on your bagel?”

Above and below the photo-shopped image of Bloomberg are the taglines: “You only thought you lived in the land of the free,” and “New Yorkers need a mayor, not a nanny.”

The Center for Consumer Freedom, which is behind the ad, refers to Bloomberg as the “Great Dictator” on its website.

Bloomberg’s plan, which is part of an effort to curb obesity, would make it illegal for food service establishments such as restaurants, street vendors, sports venues and movie theaters to serve sugary drinks larger than 16 ounces. 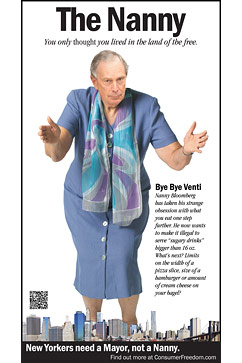 The ban would apply to both bottled soda and fountain drinks containing more than 25 calories per eight ounces. It would not include alcohol, fruit juices, diet soda or any beverage that is at least half milk. Grocery stores and convenience stores would be exempt.

According to Bloomberg, New York City spends $4 billion a year on health care for overweight residents, and sugary drinks are the most significant factor in the increasing number of obese or overweight New Yorkers.

“In New York City, smoking deaths are down to 7,000 a year from something in the 20s. Obesity deaths are at 5,000 and skyrocketing,” Bloomberg said in an interview with ABC’s “World News” anchor Diane Sawyer. “Obesity will kill more people than smoking in the next couple of years.”

“The New York City Health Department’s unhealthy obsession with attacking soft drinks is again pushing them over the top,” said Stefan Friedman, a spokesman for the association. “The city is not going to address the obesity issue by attacking soda because soda is not driving the obesity rates. In fact, as obesity continues to rise, CDC data shows that calories from sugar-sweetened beverages are a small and declining part of the American diet.”

“You have to want to do it, and I don’t think this ban is going to make people want to change their behavior.” said Besser on “Good Morning America.”

Bloomberg argues that the proposal is not a government proscription, but rather a public awareness campaign.

“It’s purely education. It forces you to see the difference, in the case of the two different sized cups,” Bloomberg said. “The public does act when they get the information. And all we’re doing here is saying, ‘If you want to order 32 ounces of soda, in a restaurant that we supervise, this restaurant must give you two 16-ounce glasses.'”

Some New Yorkers supported Bloomberg’s decision and called it a step in the right direction.

“I think it’s a good way to send a message that he’s supporting healthier lifestyles,” said one woman.

Others said the proposed ban is another example of government overstepping its bounds and infringing on consumer choice.

“I don’t think it’s the mayor’s job to decide what sort of soft drinks that people in Manhattan or anywhere in the world want to buy,” said one man.

In statements, both Coca-Cola and McDonald’s came out against the proposal. Coke called the plan an “arbitrary mandate” and encouraged New Yorkers to “loudly voice their disapproval.” McDonald’s labeled it “misguided” and said that solving the obesity epidemic “requires a more collaborative and comprehensive approach.”

The mayor told Sawyer that banning large sodas is no different than other government actions.

“Would you suggest that if there’s asbestos in the building we stay away and just let people walk in and out of the building and die from cancer? I don’t think so,” he said.

Bloomberg has a history of enacting legislation to try to make New Yorkers healthier. Since becoming mayor, he has banned smoking in many public places, outlawed trans fats in the city’s restaurants and required chain restaurants to post calorie counts.

The ban on sugary drinks requires approval from the city’s Board of Health. If passed – which is considered likely because Bloomberg appointed all the board’s members – it could take effect as soon as March.