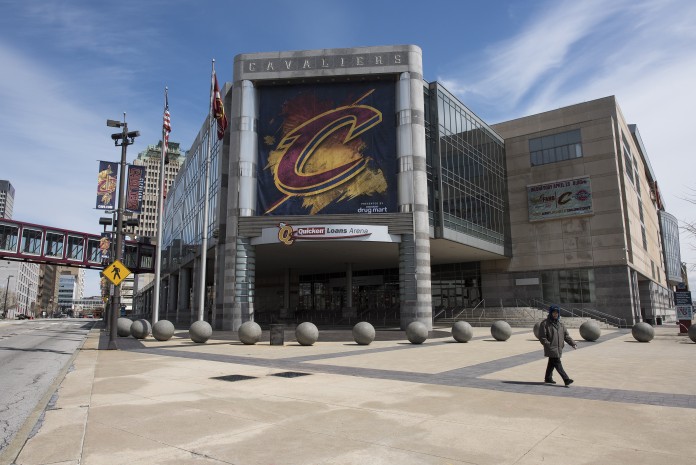 The LRAD – that’s a Long Range Acoustical Device – is a tool for ships trying to ward off pirate attacks and for settings where the precise location of law enforcement can be a matter of potential international conflict. It gives people the opportunity to speak loudly and clearly and convey critical information or warnings across large distances.

Sometimes that’s to communicate critical information related to storms, evacuations or other big events. Other times, it’s not.

LRADs also have the ability to emit sounds at a decibel and frequency so unpleasant that it can set off the human instinct to flee, repel wildlife from airports and accomplish other tasks. In fact, it’s so effective that it’s become a go-to tool for crowd control, riot suppression and large-event security.

What does all that have to do with Cleveland and the Republican National Convention (and maybe even you)? Potentially, a lot.

Every political convention since 1998 has received a special designation reserved for public events where both large crowds and dignitaries such as a presidential candidate or collection of elected officials are expected to be present. It’s called a national special security event. It comes with a $50 million federal grant to help cities purchase equipment and pay for other things necessary to try to keep the event and the area around it safe.

A growing number of cities, facing national special security events and the large-scale protests that sometimes come with them, have made use of the LRAD. It’s not clear if Cleveland has one (or more), but the likelihood is high.

For security reasons, Cleveland spokesman Dan Williams said he can’t get into the details of what the city has bought or borrowed, and if all goes well during the convention, we will likely never see much of it. The Cleveland police did not respond to a request for comment. They will oversee security in much of the “event zone” where rallies, marches and other protests are allowed to take place.

The thing about the LRAD, and other devices like it, is that more and more cities have them. And things haven’t always gone smoothly — which is what has activists, civil liberties groups and others in Cleveland concerned.

Much like the federal programs that many Americans only learned of after they saw images of police in tank-like vehicles trying to quell protests and riots in Ferguson, Missouri, those $50 million national special security event grants are changing the way America’s cities are policed. They have supplied the funds for cities across the country to obtain devices that some have described as dangerous — or, at the very least, unsuitable for urban settings.

Civil rights and liberties groups that have been trying to find out what Cleveland has or plans to buy only know this: These items will include a range of what’s known in the security industry as “non-lethal” munitions. They will be available during the RNC. They will remain in Cleveland and available for general police use when the convention is over.

“There is a balance that has to be struck between security and civil liberties,” said Joycelyn Rosnick, a co-coordinator with the Ohio chapter of the National Lawyer’s Guild.

And that balance is going to be particularly tricky in Cleveland during the Republican convention. Local and state gun laws mean that people who enter the 3.3-square-mile event zone will be allowed to carry firearms if they have a carry permit. Guns will only be prohibited in one section of the zone, known as the “secure perimeter,” which includes the convention hall. The Secret Service has security dominion there.

Here’s a look at some of what the city of Tampa, the host of the 2012 Republican National Convention, obtained or paid for with its $50 million grant :

– Communications devices, system upgrades and a closed-circuit television system for the area around the convention site

– Gear for officers, including new saddles for mounted police

– Other non-lethal munitions, such as rubber bullets and tasers

– An “assortment of chemical aerosols, irritant gases, less-lethal impact munitions and distraction devices that can be used to disperse unruly crowds and interrupt criminal attacks on persons and property”

– Overtime and benefits for police officers and fire fighters

And, in Cleveland, city officials have made this partial list of security purchases and expenses public:

– 15 motorcycles and 310 sets of protective clothing for riders

– Overtime and benefits for police officers and firefighters

There’s also been a request for proposals from companies that can supply Cleveland with tear gas.

Of course, both lists include things with which no one could argue, such as overtime pay and body armor in an area where some protesters could be armed. But there are things on Cleveland’s list that can’t so easily be described the same way.

“There are just some real reasons to be concerned,” Rosnick said. “We know right now that they have 2,000 sets of riot gear and that body cameras can’t be attached to the gear they bought. We know that other cities have used these events to obtain equipment for large crowd control and surveillance that doesn’t leave town when the event is over, potentially changing how the city will be policed. But there is really just so much we do not know. And that’s what is really worrying.”

Cleveland officials have not fully responded to a request for information submitted by a group of organizations, including the Ohio chapter of the National Lawyer’s Guild, that are concerned about the potential use of an LRAD and other devices with intimidating names like “the Stingray,” Rosnick told The Washington Post.

Stingrays allow police departments to gather metadata on all cellphones in a certain geographic area or track the location of particular phones. And LRADs, the devices mentioned at the top, can emit sounds so loud and contrary to human comfort that those who can feel compelled to flee, and those who can’t may lose their balance or pass out due to the relationship between the inner ear and equilibrium. LRADS can induce nausea and vomiting, severe headaches and, if used improperly, hearing loss. Yes, hearing loss.

The first time an LRAD is known to have been used for crowd-control purposes in the United States took place in Pittsburgh outside a Group of 20 summit in 2009. Police used the device in a space surrounded by tall buildings. The sound waves ricocheted off those structures and ultimately caused a passing Carnegie Mellon professor to suffer permanent hearing loss. The city settled with that professor and one other person in 2012, after the ACLU of Pennsylvania filed suit.

Since 2009, LRAD devices have been used for crowd control and protest and riot dispersal in several cities, including New York, Chicago, Oakland, California, and Ferguson. And many other cities have purchased them.

“I think that individuals who want to come to Cleveland this summer for the RNC have every right to go, and if they want to make their voices heard on any number of issues, they also have the right to do so,” Rosnick said. “That’s precisely why the city should be forthcoming and transparent now.”