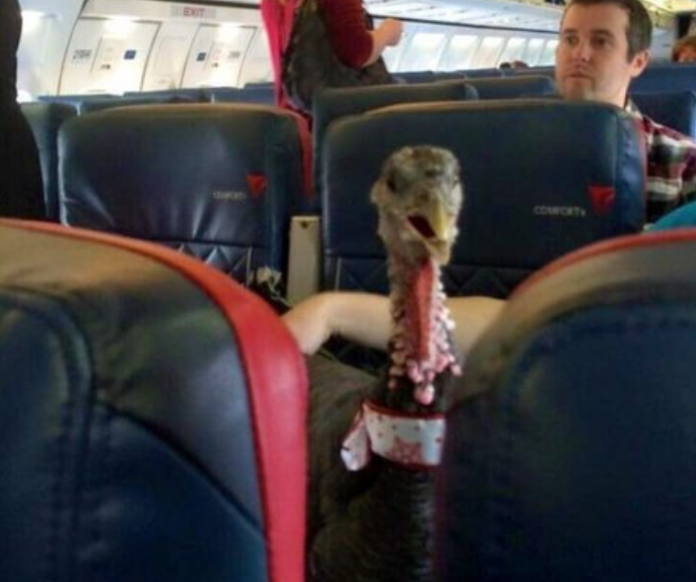 There are probably few worse places to encounter a wild animal than 30,000 feet in the air — hence the terrifying premise of the 2006 thriller “Snakes on a Plane.” Accommodations are made, however, for certain domestic animals.

In the case of one recent Delta Airlines flight, “domestic” meant a turkey. Yes, the same kind of large black bird that is culled in the weeks leading up to Thanksgiving can also be granted a seat on your next trip to Florida.

The unusual feathered companion was photographed by a flight attendant whose neighbor then uploaded the picture to Reddit.

Caught with its yellow beak half open, the turkey appears to be staring straight at the camera with its dark beady eyes. It seems quite sure of its place on board.

Behind the turkey’s slender, wrinkled neck is a human arm, presumably belonging to its daring owner.

Then, sitting one row behind the bird, there is a man in plaid with a perplexed expression on his face. We cannot say for certain the cause of said expression, but it seems a fitting reaction to such a fowl presence.

Another Reddit user, who said his friend was the pilot on that flight, posted a shot of what appears to be the same bird standing in a wheelchair. (There is also some white padding on the seat. Perhaps a cushion for the turkey’s claws?)

This is all thanks to the Air Carrier Access Act of 1986, which stipulates that airlines cannot discriminate against passengers with disabilities, including those who require service animals when travelling.

The provision also allows for the company of “emotional support animals” that travel free of charge, according to Delta’s guidelines, as long as the passenger provides documentation from a mental health professional demonstrating that the animal is needed “as an accommodation for air travel and/or activity at the passenger’s destination.”

Some animals — snakes, spiders, farm poultry — are “unacceptable.” But at least this time, the turkey made the cut.

In a statement to USA Today, Delta spokesperson Ashton Morrow said the passenger met all the criteria for bringing the bird along:

Delta complies with the Air Carrier Access Act by allowing customers traveling with emotional support animals or psychiatric service animals to travel without charge in the cabin. While we can’t always accommodate all pets, Delta employees made a judgment call based in part on extensive documentation from the customer. We review each case and make every effort to accommodate our customers’ travel needs while also taking into consideration the health and safety of other passengers.

Tom Bunn, a former commercial pilot who now runs an organization to help people overcome their fear of flying, told Fox News that it is quite easy to get a therapist note for such occasions.

“Any therapist can sign off on any kind of animal,” Bunn said. “Science has proven that when dogs look at you with total devotion, it produces oxytocin, a hormone that shuts down the fear mechanism. The turkey, I don’t think so.”

But it wasn’t all anarchy with the bird on board. Like humans, it had to follow certain rules, like not blocking aisles or emergency exits. And contrary to what the Reddit picture suggests, Delta guidelines state that “No animals are allowed to occupy seats that are designed for passengers.”

No word on whether other passengers found the turkey better or worse company than a crying baby.