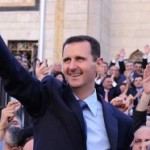 Israel believes Syrian President Bashar Assad has become so embroiled in civil war, he does not have the capacity to prevent terrorist groups on the country’s border with Israel from provoking the Jewish state, such as last week’s rocket attacks deep into northern Israeli territory, diplomatic officials told The Algemeiner.

This admission, spoken by a diplomat on condition of anonymity because of the sensitivity of the security situation in northern Israel at present, came on the heels of Israel’s accusation that the Iranian Revolutionary Guard Corp — in charge of maintaining and spreading the Islamic Revolution — had ordered Palestinian Islamic Jihad to fire four rockets at the Israeli Golan Heights. The assault was followed by a stinging overnight Israeli air campaign that killed five and struck more than a dozen targets.

The flare-up of violence at the Israeli border with Syria — a long-quiet front that has grown increasingly restive as terrorist groups, anti-government rebels, Hezbollah and Syrian forces confront each other amid the Syrian civil war — also came as the Israeli military conducted a series of training exercises over the past couple of weeks simulating a limited ground incursion into Syria, apparently in response to a potential massive rocket attack by terrorists at the border.

The Israeli military also staged a response to chemical attacks, realizing that some groups near Israel may have gotten a hold of such weapons, but military officials said the likelihood of terrorists using chemical warfare was low.

A recent document prepared by IDF Chief of Staff Gadi Eizenkot and revealed to the public earlier this month stated that while Israel still sees Iran as an existential threat — the diplomat, who spoke on condition of anonymity, told The Algemeiner that Iran is still unequivocally Israel’s top concern — the military views its main enemies as terrorist groups such as Hezbollah in Lebanon and Syria, and Hamas. Recent reports however, staunchly denied by Israel, have suggested that the Jewish state and Hamas may be approaching a long-term truce aimed at maintaining calm and allowing Gaza to rebuild following last summer’s conflict.

The diplomat told The Algemeiner that despite everything Iran has at stake — the pending P5+1 agreement to lift international sanctions and the crumbling situation in Syria — the Revolutionary Guard felt the need to remind Israel of its influence near its border, perhaps as a warning against Israeli attempts to exploit Hezbollah’s tied hands assisting Assad in Syria to push the group back.

On Saturday, Kuwaiti newspaper Al-Rai reported that Hezbollah was on high alert along the border with Israel, fearing an IDF operation that could escalate into an all-out war.

U.N. Secretary General Ban Ki-moon meanwhile expressed concern “concerning flagrant violations of the disengagement agreement between Israel and Syria,” warning both Israel and Syria to refrain from steps that could endanger the decades-old ceasefire and spark another regional conflict.