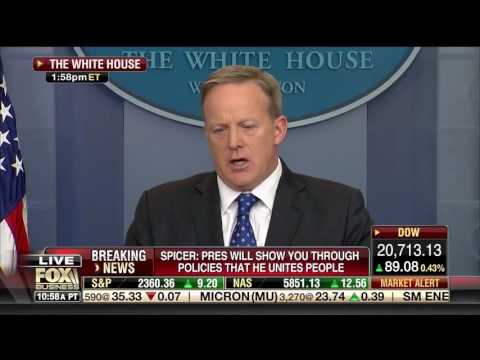 As part of a visit to the National Museum of African American History on Tuesday, President Donald Trump denounced attacks against shuls and other Jewish sites across the country.

“I will tell you that anti-Semitism is horrible, and it’s going to stop and it has to stop,” Trump said.

MEDIAITE reports that after Trump’s remarks, Stephen Goldstein — the executive director for The Anne Frank Center for Mutual Respect — posted a Facebook statement denouncing the President’s comments as, “a pathetic asterisk of condescension after weeks in which he and his staff have committed grotesque acts and omissions reflecting anti-Semitism, yet day after day have refused to apologize and correct the record.”

“I saw the statement,” Spicer said. “I wish that they had praised the president for his leadership in this area.”

Spicer lamented the criticism on the subject, saying that he’s denounced anti-Semitism prior to Tuesday.

“I think that it’s ironic that no matter how many times he talks about this that it’s never good enough,” Spicer said. “Today, I think, was an unbelievably forceful comment by the President as far as his denunciation of the actions that are currently targeted towards Jewish community centers. But I think that he’s been very clear previous to this.”