Rockland county has been hit with a massive storm that dumped an enormous amount of rain in a short period of time leaving roadways, houses and people in vehicle flooded and stranded.

The County Executive Vanderhoef declared a State of Emergency for Rockland County, effective 1 p.m. today, due to the heavy rain and flooding that are impacting the county.

Hatzolah and Chaverim volunteers were out  in full force as calls came in about people stranded in water.

Reb Moshe Goldberger, who lives off Union Road in Spring Valley, said the first-floor of his house and garage is flooded. Several of his neighbors also face flooding.

Goldberger said this is the fourth time since August and area residents are not getting any help from the Spring Valley, Ramapo or the county. 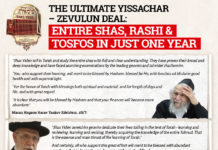 Maran Sar Hatorah Nasi: The Best Yissachar-Zevulun Pact of Our Generation Is At Shas Yiden

Police Chief: Arrested Looters in NYC Are Immediately Released Because of Bail-Reform Law