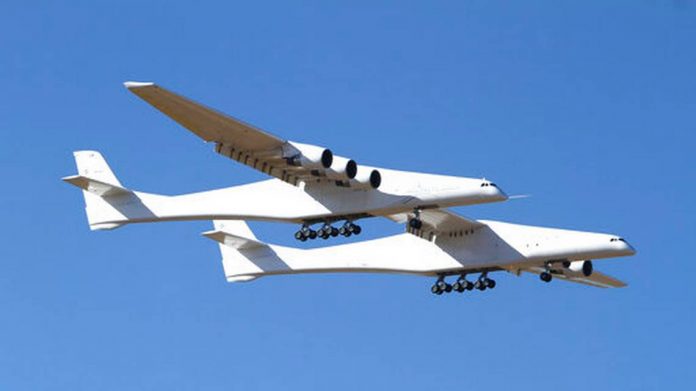 Stratolaunch, the massive aircraft dreamed up by the late Paul Allen, flew for the first time Saturday, becoming the largest plane by wingspan ever to take to the skies.

Larger than Howard Hughes’s Spruce Goose – which flew only once, in 1947 – Stratolaunch lifted off from the Mojave Air and Space Port in the California desert and stayed aloft for a couple of hours, according to photos and videos posted on social media.

The plane is a behemoth, with a twin fuselage, 28 wheels, six 747 jet engines and a wingspan longer than a football field, end zones included.

But Allen, the billionaire co-founder of Microsoft, died in October, leaving the future of the plane and the company behind it in doubt. From the beginning, Allen’s dream was to use the plane to help make getting items, and possibly people, into space more affordable and accessible.

Built by Scaled Composites, a subsidiary of Northrop Grumman, Stratolaunch was designed to carry as many as three rockets tethered to its belly into the skies; the rockets would then drop, ignite and shoot off into space with their payloads.

Allen was fascinated with the capabilities of small satellites, how they could help keep tabs on Earth’s environment, and thought “air-launching” rockets, as the process is called, could help usher in a new era of space flight.

“The capabilities of these small satellites is something that’s really interesting and fascinating,” he said. “Both for communications, where a lot of people are putting up constellations of satellites, and for monitoring the challenged health of the planet.”

The Pentagon, which is looking to become more responsive in space, had also taken an interest in Stratlolaunch. Air Force Secretary Heather Wilson visited the plane, as did Vice President Mike Pence, the head of the National Space Council.

The company was even thinking about human spaceflight, and had preliminary plans to develop a mini space shuttle, called “Black Ice.”

But for now all those plans appear to be on hold.

Allen, a space enthusiast for much of his life, funded the development of the spaceplane that won the $10 million Ansari X Prize in 2004 by becoming the first nongovernmental vehicle to pass the threshold in space.

At the time, however, the risks of human spaceflight worried him, and he decided to get out of the business. In 2011, though, he was back, announcing his plans to build the world’s largest airplane.

“You have a certain number of dreams in your life you want to fulfill,” he said at the time. “And this is a dream I’m very excited about.”