The publication of every volume in the Schottenstein Edition Yerushalmi is a cause for celebration, but next week’s release of Yerushalmi Chagigah is particularly special, as it marks the triumphant conclusion of a campaign by the Baltimore Jewish community to dedicate a volume in the Yerushalmi.

The project began two months ago, when a group of Baltimore’s lay leaders proposed a daring and exciting new idea – to raise the $100,000 needed to dedicate a volume in ArtScroll’s Yerushalmi series through a crowdfunding initiative that would include the entire Baltimore Jewish community.

And Baltimore did it!

In a wonderful show of unity, rabbanim, businesspeople, professionals, retirees, and many shuls joined together to dedicate the Baltimore Community Edition of Yerushalmi Chagigah. With donations ranging from $10.00 to $18,000.00, it was truly a project that everyone could be a part of.

Appropriately, Baltimore’s Yerushalmi Chagigah has been published in memory of Rabbi Meir Zlotowitz z’l, the Torah publishing pioneer who founded and was the driving force behind ArtScroll’s many accomplishments.  As noted author, speaker, and Baltimore resident Rabbi Yissocher Frand declared during the campaign, “My dear friend, Rabbi Meir Zlotowitz z’l, always felt that the Schottenstein Yerushalmi project was the crown jewel of ArtScroll. It is opening a portion of Torah that was closed to all but the greatest scholars for thousands of years.”

A crown jewel indeed. Each volume of the Yerushalmi is the product of the efforts of over 100 talmidei chachamim – ArtScroll’s legendary “Kollel without walls” – and it has unlocked for Klal Yisrael countless treasures of Torah understanding that were once only available to a fortunate few.

The Baltimore initiative has clearly proved that through united action everyone can have a part in the merit of important Torah projects. Give your community the opportunity to put itself on the map of Torah study and dedicate a major work. 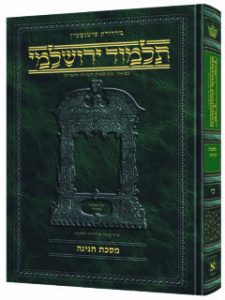