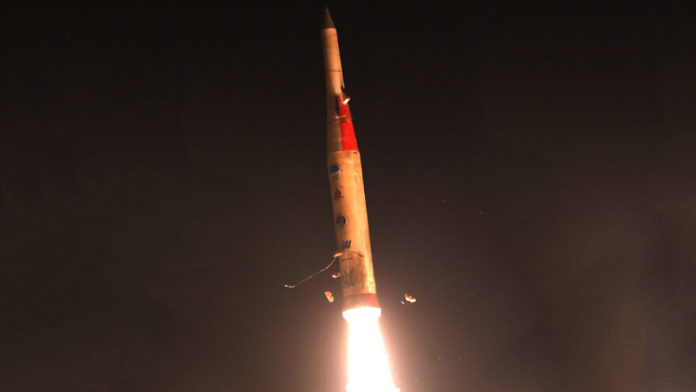 The Arrow 2 is designed to shoot down surface-to-surface missile threats in the atmosphere and in space.

“Our elite technological unit ensures that we will always be one step ahead of our enemies,” Defense Minister Benny Gantz said, commenting on the test, which occurred in central Israel.

Moshe Patel, head of the Israeli Missile Defense Organization, noted that the Arrow system entered service with the Israel Air Force two decades ago in the year 2000. Describing the midnight test as “very important,” he said that “during those 20 years, the Arrow 2 system and interceptors made huge upgrades. I can say at least give major upgrades. So we are very, very proud of [its] success.”

According to Patel, “this kind of interceptor could really face current and future threats that can threaten the State of Israel.”

Iran is developing a series of ballistic and cruise missiles that place the Jewish state within reach, while actively seeking to export guided missiles to Hezbollah in Lebanon. According to media reports, Iran has also attempted to install missiles in Syria and Iraq to threaten Israel.

Patel said that in recent years, the IMDO had been focused, “together with our [American] colleagues from the MDA, on conducting flight tests of the Arrow 3 interceptor,” which launches into space and turns into a maneuverable space vehicle that collides into ballistic missiles before they can re-enter Earth’s atmosphere.

In 2019, three Arrow 3 interceptions were completed successfully in Alaska, said Patel, describing it as a “huge achievement.”

However, he stressed, “we didn’t stop during this time to develop and upgrade the Arrow 2 system. Even with this kind of age, we upgraded the system with algorithmic improvements, especially built [to deal] with a future and developing threats. It’s not just the interceptor—it’s all the supporting system, the detection sources, the command and command capabilities that need to support the Arrow 2 system together with Arrow 3.”

The combination of Arrow 2 and 3 “can give a robust capability for our missile defenses against long-range threats,” he added.

The presence of air-force officers who worked shoulder to shoulder with engineers from defense industries in the trial meant that there was a high degree of confidence in operating the system against future threats, said Patel.

Other defense systems that intercept threats at lower altitudes also took part in the trial, including radars from Iron Dome, and Patriot air-defense batteries. “All of these systems were operated by IAF officers,” he said. “We also have the ability to see new versions of our lower-tier systems that were operated by our engineers.”

U.S. representatives present at the launch

IAI executive president Boaz Levi described the flight test as “perfect,” reporting that a target missile was fired from the Mediterranean Sea at Israel, “and the system was ready against this threat.”

He added that young IAF officers shared the same age as the Arrow 2 interceptor—a fact that “demonstrates the technological capability of the system against current threats in the Middle East.”

American representatives of the Missile Defense Agency in Israel were also present at the launch, while other American defense officials followed it via a live, classified broadcast to Washington and Alabama, where the Arrow program office is located.

In a statement, the Israeli Defense Ministry said the “Arrow 2 system successfully engaged a Sparrow target missile, which simulates a long-range surface-to-surface missile. The campaign was conducted in accordance to the defense establishment’s plans.”

The ministry added that “the joint Israeli-American test reflects the partnership and friendship between the two countries, as well as the deep commitment of the United States to the safety of the citizens of Israel. We will continue to work together to strengthen the capabilities of the defense establishment in the air, land and sea, as well as in cyberspace.”