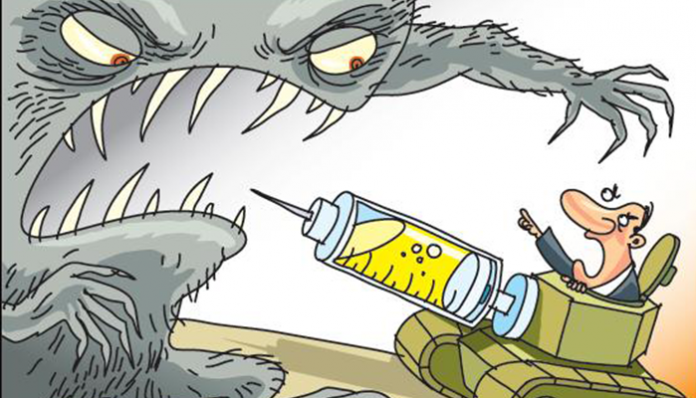 A top U.S. health official said Tuesday that it’s likely more people will be found to be carrying a newly discovered superbug. The bacteria, found in the urine of a Pennsylvania woman, is resistant to antibiotics of last resort.

Beth Bell, a top expert on antibiotic resistance at the Centers for Disease Control and Prevention, also said officials investigating the Pennsylvania superbug case don’t know how the strain of E. coli wound up in the woman’s body. And they may never find out, she said.

The E. coli bacteria contained a gene, known as mcr-1, that makes it resistant to the antibiotic colistin, the drug used against particularly dangerous types of superbugs that can already withstand other antibiotics. In the short-term, experts stress that there is no need to panic because the strain found in the woman is still treatable with other antibiotics. E. coli is very common and is typically present in the human gut.

But the discovery has alarmed public health officials because it’s the first time this colistin-resistance gene has been found in a person in the United States. Over the long term, experts are very worried that colistin resistance, which can spread easily to other bacteria through this gene, could lead to superbugs that could cause untreatable infections.

“We don’t know a lot about this particular gene,” said Bell, director of the CDC’s National Center for Emerging and Zoonotic Infectious Diseases, during a telephone briefing with Pennsylvania state health department officials Tuesday. It’s possible the person acquired it from food or person-to-person transmission.

“It’s possible, in this particular situation, that we won’t ever find out,” she said.

But she said officials weren’t surprised that the resistance gene turned up in the United States. U.S. officials have been hunting for it since last November, she said, after Chinese and British researchers reported finding the colistin-resistant strain in pigs and raw pork and in a small number of people in China. The superbug strain was later discovered in Europe and elsewhere.

“We’ve been looking for this mcr-1 gene for quite some time,” she said.

In the United States, “it’s likely that more of these [cases] will be found,” she said. “We are a globally interconnected world and people and bacteria travel around the globe.”

Bell also said people should not be worried.

“The risk to the public at this point is pretty much minimal,” she said. She and other experts have said the best way people can protect themselves against antibiotic-resistant bacteria is to cook food completely and wash hands carefully, especially after handling anything that might be contaminated.

Researchers at the Agriculture Department and the Department of Health and Human Services reported that testing of hundreds of livestock and retail meats turned up the same colistin-resistant bacteria in a sample from a pig intestine in the United States. USDA said it is working to identify the farm the pig came from.

The woman was treated on April 26 at an outpatient military facility in Pennsylvania, according to Defense Department officials. Samples were sent to the Walter Reed National Military Medical Center for initial testing. The tests confirming the presence of the resistance gene, known as mcr-1, were done by researchers at the Walter Reed Army Institute of Research in Silver Spring, Md.

Citing privacy, Pennsylvania health department officials said they could not provide an update on the woman’s health, whether the woman and others had been interviewed, what brought the women to the clinic, or whether the patient poses any transmission risk.

“The patient herself is fine,” said CDC’s Bell, who said she could not elaborate.

The CDC was notified about the discovery by Walter Reed researchers on May 24, and then notified the Pennsylvania health department.