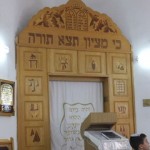 A massive majority of Jews in Europe are fearful of publicly identifying as Jewish, leading to decreased participation in ceremonies and prayer services, a new survey of European Jewish communities Tevealed, the Algemeiner reports.

According to details published by Israel’s Channel 2 on Tuesday, 85% said they will not bring their children to shul on Rosh Hashanah this week out of concern for their safety.

The survey, which revealed a widespread decreasing sense of personal security among Jews, was conducted by the Rabbinical Center of Europe (RCE) in 179 Jewish communities across the continent. The questionnaire found that Jewish fears have been stoked as a result of the recent large influx of immigrants and refugees from the Middle East into Europe.

European Jewish organizations are concerned over these statistics, according to the report, because they further demonstrate the negative effects of the rise in antisemitism and nationalistic fervor across Europe, as well as the increasing level of Islamic immigration to the continent, on Europe’s Jewish communities and the participation of their members in communal activities.

“Rabbis and many community leaders from across Europe are, unfortunately, reporting an increase in Jews who are refraining from all public identification with their Judaism,” Rabbi Menachem Margolin, the head of the European Jewish Association, told Channel 2.