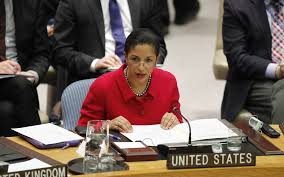 “Even in these days of belt-tightening, we are prepared to sign the single-largest military assistance package—with any country—in American history,” Rice said at the American Jewish Committee’s Global Forum in Washington, DC. She said the new 10-year aid package to Israel is expected to be in the area of $37.5-$40 billion, up from the expiring 10-year package of $31 billion.

“It would constitute a significant increase in support, and provide Israel the funding to update much of its fighter aircraft fleet, substantially enhance the mobility of its ground forces, and continue to strengthen its missile defense capabilities. That’s what we mean when we say Israel is not alone,” said Rice.

At the same time, Rice said that “as we mark the 49th anniversary this week of the Six-Day War, we continue to strongly oppose Israeli settlement activity. Just like every administration since 1967, Republican and Democratic. Just as we oppose counterproductive Palestinian actions and strongly condemn incitement and violence. Settlement activity corrodes the prospects for two states. It moves us toward a one-state reality. Israel’s future as a Jewish, democratic state is at stake.”