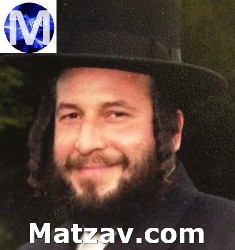 New York – The NYPD has taken at three suspects into custody in connection with the murder of Reb Menachem Stark z”l.

No formal arrest has been processed yet, according to one source, and there is no further information about this development at this time. Sources further indicate that the incident was a basic robbery, not an act of retaliation or the like. Again, no formal arrest or charges have been made. The NYPD has thus far been mum on the revelations.

Three months ago, after leaving his real-estate ­office on Rutledge Street in Williamsburg, Reb Menachem was accosted by two suspects who wrestled him into a minivan. The next day, Reb Menachem’s body was discovered partially burned in a dumpster at a Long Island gas station.

The beloved member of the Williamsburg community leaves behind his wife, Mrs. Bashie Stark, and their seven children, five sons and two daughters. His oldest child, a daughter, is 16. His youngest is a one-year-old boy. He is also survived by his parents, Reb Yisroel and Shaine Etya Stark, and eight siblings, five brothers and three sisters.