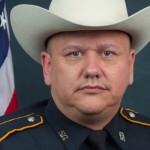 A Texas sheriff’s deputy was killed at a gas station Friday night after a gunman ambushed him and shot him multiple times. Officer Darren Goforth, 47, was refueling his cruiser at a Chevron station after responding to a routine car accident when the suspect, who has since been taken into custody, came up behind him and shot him then fled in a red or maroon Ford Ranger pickup.

“The deputy fell to the ground…the suspect came over and shot the deputy again multiple times as he lay on the ground,” Harris County Sheriff Ron Hickman said. He added, “in my 45 years in law enforcement, I can’t recall another incident so cold-blooded and cowardly.”

The suspect is described as “a dark-complexioned man about 5 feet 10 to 6 feet tall, wearing a white T-shirt and red shorts. He is believed to be between 20 and 25 years old,” according to Hickman. He was taken into custody at his mother’s house, after she called authorities to tell them he was there. Security footage of the suspect is shown below. Read more at the Houston Chronicle.