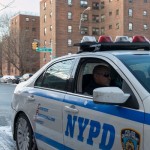 Three months after an elderly frum man was beaten up in the Jewish neighborhood of Williamsburg, Brooklyn, two teenage suspects have been arrested, NYPD officials said.

Oizer Herman, 65, was walking at the intersection of White Ave. and Wilson St. around 11:15 p.m. on July 6 when he was approached by a black male and female. The two suspects hit the elderly man in the head several times with an unknown object.

A 13-year-old female and 13-year-old male, who reside in Brooklyn, were arrested and charged with assault and harassment, police said.

Detectives from the Hate Crimes Task Force worked diligently in obtaining several surveillance videos, while interviewing several people that lead them to the two arrests, the official said.

The two teens who are close friends, told investigators they were playing some game when they came across the Jewish man and hit him, but bias was not the motive in the assault, the official added.

The attack on Herman came one week following a 25-year-old Jewish man, who was assaulted in the head with a Snapple glass bottle, and an Orthodox Jewish man was assaulted in a paintball attack — the fifth of its kind. No arrests were made in any of these cases.