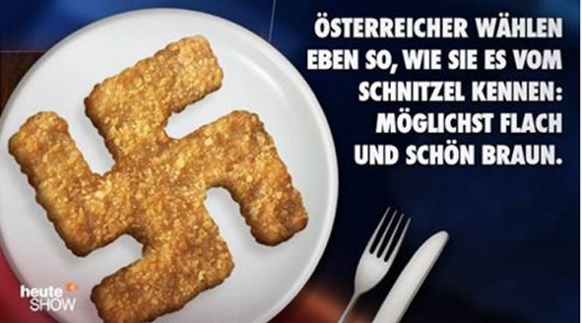 The producer of a primetime television program in Germany is being investigated for posting a photo of a swastika-shaped schnitzel on social media.

Prosecutors in the German town of Mainz confirmed that they are investigating the case after receiving complaints about the food swastika, including one by Austrian law student Emanuel Falch, who said the producer should be prosecuted for branding people as Nazis. A spokesperson for the prosecutors said, “In fact there were several complaints, including two from Austria.”

The photo in question was posted on April 25 on the Facebook page of the German program, Heute Show. The message accompanying the meme reads: “Austrians are voting the same way they like their schnitzels, mostly flat and brown,” a reference to the color of the shirts worn by Nazi militias. It also says, “What is wrong with you, dear neighbors?”

The latter question is a reference to Austrians supporting candidate Nobert Hoferin from the far-Right Freedom Party. At time of publication, the image still appeared on the show’s Facebook page.

The law cited in the investigation of the producer was used recently by Turkish President Recep Tayyip Erdogan to go after comedian Jan Bohmermann — from the same network, ZDF — for writing and reciting a crude poem about Erdogan, The Sun reported.

Freedom Party leader Markus Abwerzger said he accepts the complaint about the offensive photo, but doesn’t think it will be successful.